Well it’s no secret that the 2017 Slave Lake Riverboat Daze festival was one of the better ones in recent years. Between the children’s carnival, an old-fashioned community block party and bringing back the sand sculpture contest; it’s easy to assume community members had a good time.
“It was a great success!” says Chamber president Frankie Giroux. “We really tried to bring back Riverboat Daze community spirit and from feedback we’ve received, people are saying it reminded them of old Riverboat Daze.”
Giroux said planning this year’s festivities wasn’t always easy but the turnout was all worth it.
“I first joined the board back in Feburary,” she Giroux. “Then the Riverboat Daze committee was formed in April, so it’s been two months of hard work and planning by all of us. We really tried to make it a weekend full of events. That all had such great attendance.”
The events Giroux talks about, include the children’s carnival, farmers’ market and the sand sculpture competition up at Devonshire Beach.
One of the major successful events during the three-day-long festival was the ‘Rock the Block’ party, which Giroux estimates had well over 1,000 people attending. “We have 500 people in the food court alone,” she says. “We had 75 vendors and non-profits set up too. It was a great way for the Chamber to bring together local businesses and community members in the downtown area.”
Giroux adds, “I and the board are just so thankful to the businesses and volunteers who played a part and believed in our vision for this Riverboat Daze.”
Another draw to this year’s celebration was the bringing-back of the sand sculpture contest. Megan McNeil co-ordinated the competition and says she couldn’t be happier with the turnout.
“There hasn’t been one since the fire,” she says. “And it’s a shame because we have a big beautiful beach that we don’t utilize enough and it’s a big draw for tourism. I wanted to bring back the contest first on a smaller scale then see it grow back into what it used to be.”
According to McNeil, the contest brought in six teams and hundreds of community members to Devonshire Beach.
“It was a big event!” she says. “I’m thinking around 500-600 people showed up and it was very well received. I haven’t heard one negative remark about it.”
So what’s next for the Chamber? Giroux says it will keep up with its summer programming ‘Downtown Wednesdays.’ Then in the fall it will shift its focus on hosting an election forum and Small Businesses week.
For more information on the Slave Lake and District Chamber of Commerce visit its website, http://slavelakechamber.com. 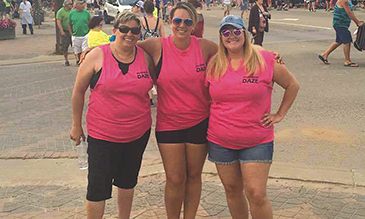 The ‘boss ladies’ behind the ‘Rock the Block’ party. (l. to r.) Rebecca King, Frankie Giroux, and Kimberly Hughes. 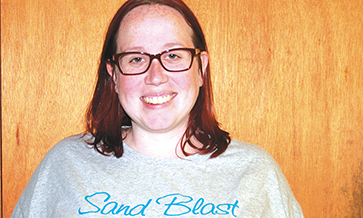 Megan McNeil, the mind behind this year’s sand sculpture competition at Devonshire Beach.