Nobody knew it at the time, but last week’s hazard-reduction burn in the meadows north of Slave Lake was the last of the season. Approximately 110 of the targeted 150 hectares of heavy, dry grass went up in smoke in about six hours of burning.
According to Wildfire Information Officer Leah Lovequist, that capped a season with 500 hectares of such grass-burning around communities in the Slave Lake Forest Area.
“It reduces the build-up of fuel,” she says. “It keeps grass at a manageable level.”
Last week’s burn actually started a day earlier, with personnel going out to burn smaller ‘guard’ areas, around power poles, for example.
It was a fairly quiet fire season in the Slave Lake area, thanks mainly to frequent rain. Lovequist says there were 124 fires in the region, burning 17,710 hectares. But the great majority of the fire starts did not amount to much. One fire accounted for over 17,000 hectares of the area burned – the one northeast of Chipewyan Lake. Due to its remoteness, and the absence of threat to human property or even much in the way of valuable timber, it was allowed to burn. Efforts were made, however, to control the direction of spread, Lovequist says. The five-year averages for fires and hectares in the Slave Lake area are 140 and 27,000.
Provincially, there were 1,486 fires in the 2017 season, burning around 49,000 hectares. The number of fires was just a bit below the five-year average, but the area burned was well below the average (300,813 ha.). The most active areas in the province were around Calgary and High Level – in both cases due to a shortage of moisture.
Lovequist says from Nov. 1, burning permits are not required in the area. However, she urges people burning brushpiles to let the Alberta Ag and Forestry office know where and when such burning is happening. That can be done by calling Russell Murphy at 780-849-7457. It is also urged, she adds, to not do any burning until the ground is well frozen.
“You are responsible for making sure your fires are out,” Lovequist says.
Wildfires are not out of the question in the off-season. If you see something you think should be reported, 310-FIRE is the number to call.
In other news from the fire season, the Slave Lake region ‘exported’ 450 firefighters and support staff to help with fires elsewhere in Alberta, plus in B.C. and the U.S. That number includes “multiple deployments” of the same people.
“B.C. came to our aid many times,” Lovequist says. “It was great to return the favour.” 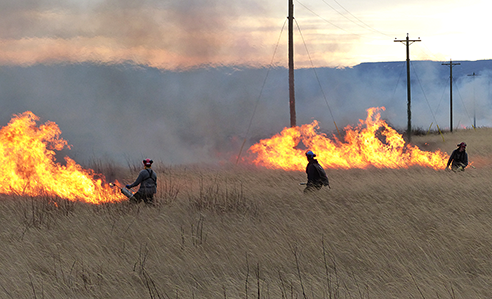