Attendees at the recent Slave Lake Musical Theatre Association production of ‘100 Lunches’ probably noticed the dazzling performance by Andrea Avery, as theatre critic Charity Starr. ‘Who is this person?’ was the question in many minds. ‘Where did she come from?’
The Leader wondered the same thing, so we asked.
Growing up in Charlottetown and loving the theatre, Andrea Avery didn’t realize how good she had it. She minored in theatre at the University of Prince Edward Island and was involved (mostly backstage, she says) in professional theatre.
“Then I moved to Dixonville.”
That was when she started to gain an appreciation for what she’d had back home. Dixonville Alberta is a community of 104 people about halfway between Grimshaw and Manning.
“There’s a lot of hunting,” Avery says, but after-school theatre club…. not so much.
But instead of fretting about it or complaining about it, she rolled up her sleeves, got to work, recruited kids into a theatre program and made it happen.
“We did dinner theatre two years in a row,” she says.
This was in a school of 38 students, K – 9.
Joining Avery for that second year of theatre was her friend from UPEI, Darcy Lewis. He’s been involved in musical theatre for years, “singing, dancing and acting,” he says. He’s now also working at E.G. Wahlstrom School, where Avery has been stirring things up now for a couple of years. They make a good team, and are currently hip-deep in the early going for a ‘major musical,’ with a cast and crew of about 80 students.
“I’m passionate about it,” says Avery. “Wherever I was going to go there was going to be theatre.”
Lewis is handling the choreography for ‘Seussical,’ a kids’ version of the Broadway play that runs about 30 minutes. The dates are already chosen – April 18 and 19, 2018.
“We had to do it early, because Darcy is starting his B.Ed. program in May,” Avery says.
“I plan to come back as a teacher,” Lewis says.
April is some distance away, but there’s a lot to learn. Avery and Lewis have the kids practicing once per week on Mondays for the time being, with a bit extra noon hours for some with bigger parts.
“A couple are off book already!” says Avery.
Beg pardon?
“It means they’ve memorized all their lines,” she explains to the unversed interviewer.
Not bad for kids in Grade 6, but with this sort of thing now entering its third year at E.G. Wahlstrom, some of the older ones have been there before twice, “and they know what’s expected,” says Lewis.
Momentum appears to be building in other ways as well. Avery says support from the administration at the school has been solid, and help is coming from both staff and parents.
“Also from former drama club students who are now at Roland Michener,” Lewis adds.
So mark April 18 or 19 on your calendars for ‘Seussical’ the musical, and see what all the fuss is about. 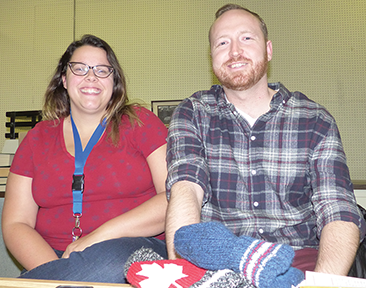 E.G. Wahlstrom students rehearse a number in the musical Seussical, based on the Dr. Suess stories.