Aiming for a spring performance

“PG-13,” says Slave Lake Musical Theatre Association (SLMTA) President Sean McConnell. “Does that still exist?”
McConnell was trying to characterize the stage play the SLMTA is planning for the spring. It’s called ‘The Crazy Time,’ a comedy by Sam Bobrick.
“It’s guys trying to understand women,” McConnell says. “There’s some humour in it.”
That may be an understatement, given that on Bobrick’s own website it is subtitled ‘A Comedy.’
But let’s not split hairs! It’s funny, and evidently not intended for young kids.
Who’s directing it we did not find out, but organizers are getting right at the organizing, with auditions for the play’s five parts coming up on Sunday, Jan. 21.
“The parts needed are three male and two female,” McConnell says.
Two guys in the 40 – 50 years range are needed and one in his early 20s. One female character is 40 – 50 years old and one is in her 20s.
“We also need volunteers for sets, costumes, backstage,” McConnell says. “Come out as well.”
The SLMTA has big plans for the next couple of years. They already have next fall in mind for a production of ‘Boys and Ghouls Together,’ which some in town will remember the Roland Michener Drama program put on to great acclaim once upon a time.
Building an audience for live theatre is a big part of the program over that time. The Legacy Centre does not come cheap, and McConnell says ticket sales for upcoming plays simply have to be better than they were for last fall’s ‘One Hundred Lunches.’ As enjoyable as that play was for pretty much everyone who saw it, ticket sales didn’t cover costs.
In any case, if you’re interested in being part of the spring show, give McConnell a call at 780-849-1782, or drop by St. Peter’s Ecumenical Church in Slave Lake this Sunday, Jan. 21, at 6:00 p.m. 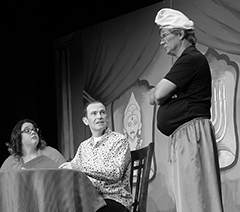