Slave Lake Minor Baseball’s only undefeated team got going in Tier I provincial play on the weekend, with mixed results. For one thing, the Bantam ‘AA’ Heat aren’t undefeated anymore. On the other hand, they took two of three games and have all kinds of reasons to be optimistic about their chances.
Game 1 on Saturday against Fort Saskatchewan Red Sox (this was at Sinclair Fields) was a close one until the fourth inning.
“That’s when the bats came to life,” says co-head coach Kevin Campbell. “Will Chemago got things rolling with a fifth-inning, two-run home run and Parker Hay also went two-for-four at the plate.”
Uneeb Khan pitched three innings, then handed the ball to Hunter Mouallem, who did not allow another run.
Against the Grande Prairie Reds in Saturday’s second game it was a different story. The Heat had the early lead, but GP battled back, winning by a 6 – 4 score. “We did manage base runners,” says co-head coach Dave LaFrance, but “we weren’t able to push them around.” The Reds’ pitcher was “efficient,” he says.
Matt LaFrance and Chase Nehring handled pitching for the Heat.
That was the first loss of league play for the Heat, who play four games in St. Albert and Fort Saskatchewan this coming weekend.
On Sunday morning, the Heat and Grande Prairie got back at it in an exhibition game – this time with Slave Lake winning handily, 21 – 9. Pitching for Slave Lake were Ethan Wedmid, Aiden Blocka, Kyle Campbell, Carson Masur, Tayyab Khadim and Will Chemago. 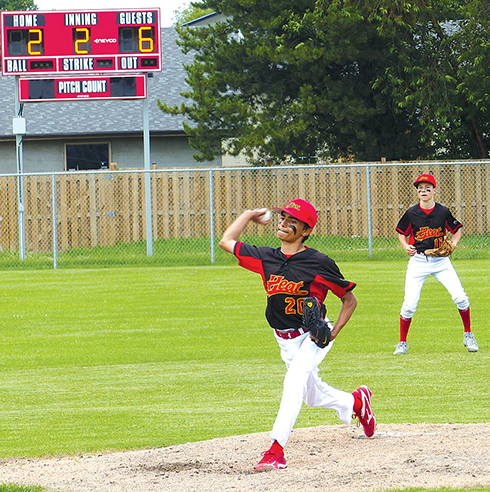 Uneeb Khan chucks one in there with his team the Bantam Heat leading Fort Saskatchewan 6 – 2 in the second inning.