Area members of the Alberta Beef Producers expressed their own beefs to move forward to strengthen the industry.
A priority to raise the positive profile of beef was a key issue expressed during round- table group discussion Nov. 1 at Triangle Hall at one of several the fall meetings of the ABP around the province.
Much of the meeting provided opportunity for members to share concerns about consumer trends and perception and how to encourage succession in farm operations.
“Some of the concerns are the same from other meetings around the province, but we always get one or two different items at each meeting,” says ABP vice-chair Roland Cailliau, of Valleyview.
Top concerns included the public getting the wrong message about beef from advertising, a perception that organic or hormone-free is better, doctors recommending no meat in a diet, younger generation trending to a vegetarian lifestyle, consumers telling producers how to farm and how quality control is assured in stores.
One year ago, the issues were similar when producers shared concerns about market fluctuation, volatility, government legislation and policy and consumer perceptions and trends.
“It was pretty much province wide,” says Zone 9 director John MacArthur, of Fairview.
During the current year, the ABP has focused on government relations and speaking with elected official and senior bureaucrats, developed marketing campaigns aimed at consumers, supported national market access and development and promotional activities and set initiatives for sustainability and young producer programs.
Cailliau says working with government can be frustrating at times, when negotiations and decisions by elected official can take longer that the ABP expects.
He notes that some government decisions are not in the best interest of the beef industry.
The ABP has worked to influence government legislation on issues such a public land grazing framework, health and safety on farms and ranches, and labour legislation.
Concerns of producers reflect much of the six strategies set by the ABP executive for 2017-18, to:
1.Maintain and enhance relations with the Government of Alberta to ensure the ABP is recognized as a respectful and credible advocate for cattle and beef producers in Alberta.
2.Enhance dialogue with consumers to build greater confidence in public trust in Alberta beef and the Alberta beef industry.
3.Ensure that Alberta land, water and environmental policies support the interests of farmers and ranchers.
4.Ensure the sus- tainability of the beef industry by creating succession in the industry.
5.Improve the access of Alberta cattle and beef producers to the information and technology necessary for sustainable and competitive operations.
6.Resolve current industry funding issues and establish predictable farming levels for the future. 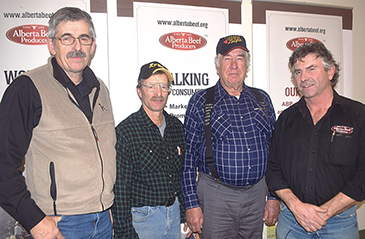