The area’s longest-running sports festival goes again this year at Widewater, June 9 – 11. Known since 1959 as Widewater Sports Days, it features men’s baseball and mixed slowpitch tournaments, along with other entertaining and fun stuff.
“We’re tying it to the Canada 150 theme,” says chief organizer Harry Bartlett, of the Widewater Athletic Association.
What’s that mean? Well, for one thing, no entry fee (at the gate) for the first time in 58 years. Come one, come all. Camp by the lake, watch some ball games. Play some ball games! Play bingo! Play horseshoes. Whatever you like.
Did somebody say bingo?
“The Legion is coming out with their mobile bingo,” says Bartlett. “It’ll be in the complex.”
Another group getting involved for the first time also is the Northern Lights 4-H Club. It plans to run a horseshoe competition, “and other things to help us,” Bartlett says. “They’re talking about a dunk tank.”
The centrepiece of Widewater Sports is the men’s baseball tournament. Ideal would be six teams, Bartlett says. He’s got two committed from Edmonton so far, and is pretty certain about another couple from this area.
“I’m optimistic,” he says.
Recruitment of slowpitch teams for both competitive and non-competitive tournaments hasn’t started yet, but usually works out well enough.
“Call me!” says Bartlett 780-805-0482.
One thing Bartlett says he’s been hearing is that if prize money were higher, more teams would enter. So the decision has been made to up the entry fee (for men’s ball at least) and consequently the prize payouts.
On the minor ball side, Bartlett says the association welcomes any entries. There won’t be entry fees, but the opportunity is definitely there to squeeze in some games.
There you have it. Just a few weeks away. 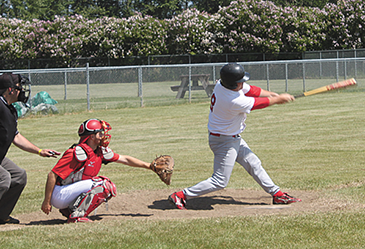 Cody Sinclair of the Slave Lake Cardinals tries to wallop one over the lilacs in the 2015 Widewater Sports Days baseball tournament.