“Tremendous!” That’s Cleo Carifelle’s response to a question about how much difference a recent provincial government announcement about more money for daycare will make at the Slave Lake facility.

Carifelle, the president of the Slave Lake Childcare Society, was one of those present on April 26th when Premier Rachel Notley cut the ribbon on a new era for the Legacy Daycare. It consists of two major components: a subsidy that allows the daycare to charge $25 per day, per child (for most) and 18 more spaces. The latter will require some renovations to the existing space.

A bit more in salaries, she says, plus more money for training in new curriculum.

As for how much of a difference the $25 maximum daycare fee makes to parents, Carifelle says it’s about half what they would be paying for infants and toddlers; for those 18 months and older it’s about two thirds what they would have been paying.

The new fees kicked in on May 1, but even before that, the phone started ringing.

“As soon as it came out we had parents calling,” Carifelle says, “and people trying to get on the list.”

For now getting on the waiting list is as good as it gets. That list will become 18 places shorter when the renovations are done; otherwise it’s still a waiting game.

Carifelle says the daycare looks after about 120 kids daily, serving around 200 families (not counting school-age clients). 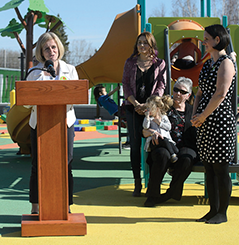