Should municipalities keep a pot of money to dole out when community groups come looking for support for good projects? The Town of Slave Lake did in its budgets the last couple of years, but cut that item out of its 2017 budget. It was one of the things council felt was expendable in an effort to avoid a tax increase for this year.
So when a group with a worthwhile event asked council last week for financial support, it was pretty tough. Councillors clearly liked the idea of a big pow wow in Slave Lake. The vision of the Slave Lake Pow Wow Society has economic benefit written all over it, and council has been saying for years how it wants that sort of thing to happen here.
Pow wows, it turns out don’t come cheap.
“We’re looking for $108,000,” said Amanda McKay, treasurer for the SLPWS.
“That’s a big number!” said councillor Darren Busk. “I have no idea where we would find $10,000, let alone a hundred.”
Letter of support? No problem. But this is a council that spent something like 90 hours this past winter scraping the budget down to the bone so they wouldn’t have to raise taxes. As councillor Mark Missal pointed out, the 108 grand represents “a one-and-a-half per cent tax increase.”
In response to a question, Mckay said the group had already been turned down by the Sawridge First Nation for funding (but got a letter of support in principle); next up is the M.D.
Peter Auger, the acting president of the pow wow society, painted a picture for council of something that could be pretty impressive. He gave as an example of a pow wow he organized in Wabasca, that he said brought in people from all four western provinces and even from as far away as New Mexico.
“The stores couldn’t keep up,” he said.
Auger predicted that if it goes as planned there could be thousands of people visiting town. A third the size of the 1994 Arctic Winter Games, he said, for perspective for those who remember that event.
The total budget for the pow wow, as presented in council’s agenda package, is $154,000. Grants have been applied for, McKay said, and the group would welcome the town’s help in identifying others. The dates for the event have been set for July 19 – 21 and the multi-rec centre has already been booked.
Summing up, mayor Tyler Warman said, “The letter of support is easy. Camping? Talk to administration; I’m sure you can work something out. Waiving fees? It’s something to consider.”
Warman also urged the group to talk to the regional economic development group and to the Chamber of Commerce.
Council passed a motion directing town administration to work with the group on grants and other matters pertaining to permits. 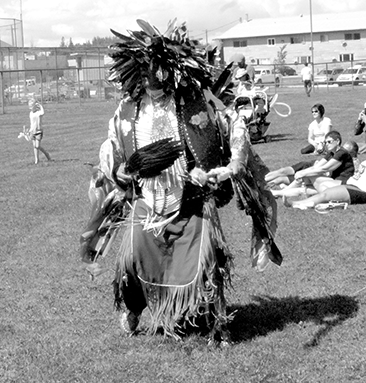