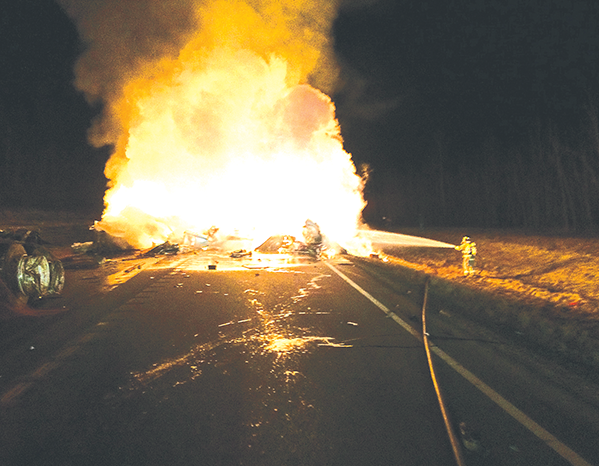 A firefighter tries to cool down the edge of a truck fire on Hwy. 2 in the early morning hours of March 30. Photo courtesy Patrick McConnell

Highway 2 east of Slave Lake was closed for several hours on March 30 when a transport truck crashed into another one. One driver was hurt.
According to a release from the RCMP, one truck was rear-ended by the other. The collision sent the driver of the second truck flying out of his vehicle. His injuries were described as ‘non-life-threatening.’
The other driver was not injured.
The truck that ran into the other truck caught fire as a result of the collision. Photos taken by the Lesser Slave Lake Regional Fire Service showed that it got pretty big and pretty hot. Deputy fire chief Alex Pavcek says his crew had a long night, being called out at about two in the morning. When they departed the scene about seven hours later, the mess was still being cleaned up and the highway was still closed. Traffic was being diverted around through Smith via Hwy. 2A.
That was a solution for some, but not all traffic. The Leader heard of a trucker with a load that was not able to take the detour due to spring road bans on the Old Smith Highway.
Neither truck was carrying dangerous goods, RCMP said.
The crash happened 40 kilometres east of Slave Lake, not far from the spot last year where two big trucks crashed into each other in the ditch, several hours apart, killing two people.
One of the trucks last week was carrying crushed vehicles. Several of them caught fire too, according to fire chief Jamie Coutts. He describes it as “just a fairly large firefight. (We) brought in trucks from Slave Lake, Smith, Flatbush. Three tankers, three fire pumpers, two pickups. One serious injury and seven vehicle fires (six were crushed up cars going to metal recycle).”
About the reason for the accident, police have released nothing.
Don Brown of Calgary was riding north on the bus from Edmonton when they came upon the fire at about 2:00 a.m.
“We sat there on the highway for the next 12 hours,” he says.
Brown says the two trucks were headed towards Edmonton. The truck that rear-ended the truck carrying crushed cars was an empty chip truck, he said. It’s the one that caught fire. He has a photo of its charred engine block sitting on the pavement, with a mass of twisted and blackened metal in front of it. It’s hard to recognize anything resembling a cab in the wreckage.
Brown says from what he was told (he knows the driver of the truck that got rear-ended) the driver of the chip truck ended up lying in the ditch. The other driver, with help from another man who had stopped, wrapped him in a blanket and got him away from the fire. 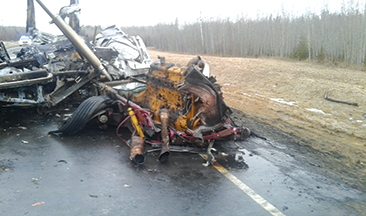 The engine block of the burned truck, with what is left of its cab, after the fire was put out. Photo courtesy Don Brown 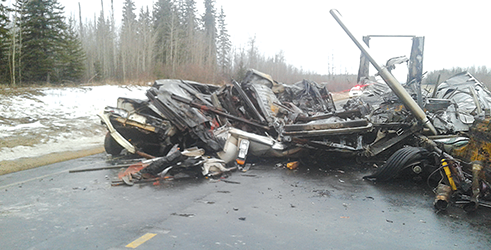