The Slave Lake Elks are bringing comedian Don Burnstick to the Legacy Centre this Saturday. The big show starts at 7:00 p.m. and tickets are available online at legacycentre.ca, or in person at the Legacy Centre, Bobby & Associates, Select Rentals and Eiserman Meats.
Burnstick is a funny guy, no question. He’s been to Slave Lake at least a couple of times before so many will already have an idea about his Burnstick schtick, so to speak. But it won’t be the same old stuff.
“I’m trying to stay current,” Burnstick told The Leader in a phone interview last week. “The world is changing and you have to keep up. There’s always something to make fun of.”
Burnstick is from the Alexander First Nation near Morinville. He grew up rough and overcame alcohol and drug addiction and for the past 20 years or so has been involved in helping others heal, using humour for that purpose. On top of that he’s a professional stand-up comic, with all sorts of acclaim, performing at such venues as the Winnipeg Comedy Festival. In fact he lived in Winnipeg for 15 years, but has relocated to Alberta, where his popularity is pretty solid.
“I sold out River Cree eight times,” he says
Burnstick remembers playing to a packed house at the Friendship Centre in Slave Lake, back when he was just starting out.
“I’m familiar with Slave,” he says. “I remember the flood!”
The main difference between him and regular folks, Burnstick says, is that everybody thinks funny things, but he says them. On the other hand, there are lines he won’t cross.
“I don’t swear in my shows. Once you start dropping F bombs, you can’t go back.”
He thinks comics who try to shock people by how gross they can be are not being very clever. It takes hard work to be funny, he says, but you can do it and still be reasonably respectful.
On the other hand, Burnstick can certainly be ‘suggestive.’
“I have an adult show and a family show,” he says.
Which one will he be doing in Slave Lake this weekend?
“I don’t know,” he says. “It depends what’s in the contract.”
Eighteen and up, says Legacy Centre manager Crystal Potts-Jensen. 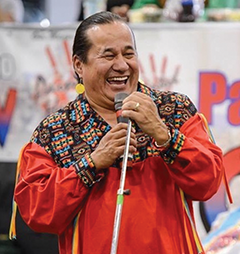 Don Burnstick: crossing the line, but not all the way.