It turns out in the world of the Alliance Church there’s an important difference between an ‘interim’ and a ‘transitional’ pastor. Dieter Magnus is the latter, and he explains the distinction.
An interim pastor is more or less a place-filler, while the church looks to fill the position permanently. He’s not necessarily involved in the recruitment process. The transitional fellow, on the other hand, is “very much involved,” in the whole process. And while Magnus is there on a one-year contract, it can be extended.
Magnus – whose home is in Leduc – has been on the job at the Slave Lake Alliance since August, about when long-time pastor Tracy Ottenbreit moved on. The idea of the transitional position and process, he further explains, is to take the time to get it right.
“This gives us an opportunity to sit back, pray, reflect and ask who we are, where are we going and what do we need?” It’s a very deliberate process that involves a lot of conversation, and the advertisements seeking a new pastor only go out after the group has answered the above questions and has a firm idea what kind of a permanent pastor it wants or needs.
What’s fairly typical for many congregations in these situations, Magnus says, is they want to find a replacement pastor quickly. For a congregation in or near a larger centre, it’s not that hard to find speakers for Sunday services. Not so in places like Slave Lake. The hurry to hire, so to speak, can lead to less-than-ideal choices. A better alternative he says, is the transitional pastor, who can stick around for as long as it takes and help facilitate the process, at the same time as taking care of the regular pastoral duties. He’s been doing this sort of thing for a while now after 30 years as a regular Alliance pastor.
“This is my fifth transitional posting,” he says.
And how’s it going so far
“Good!” he says. “I’m very much enjoying the group of people here. I’m enjoying the town.”
Taking care of business at the church comes first, but Magnus says he’s also gotten involved in the community by refereeing high school basketball – that sport being another lifelong passion. He played both high school and college hoops, also coaching it before getting into officiating.
“I am a sports guy,” he says. “I play a bit of golf in the summer. And I certainly enjoy reading.”
Magnus grew up and went to school in Luseland, Saskatchewan, which is south of Lloydminster. Following high school he attended Briarcrest College near Moose Jaw and then went to the Canadian Theological Seminary in Regina. While there he met his wife-to-be Deborah. Their three children are now married with families of their own and living in Grande Cache, Penticton and Regina.
Magnus’s first pastoring job was in Warburg, Alberta; following that were postings in Hanna, Penticton, Invermere and Richmond, B.C.
One the other things Magnus is enjoying doing in his current gig is condensing a three-hour tutorial in Alliance Church history into about a three-minute package for his Sunday School classes. He tried it out on your Leader reporter.
“In the late 1880s there was a Presbyterian minister in Hamilton Ontario,” he says. “He preached in very high places, including the a Presbyterian Church in New York City. That was where people like the Rockefellers went.”
Rev. Albert Benjamin Simpson was his name, and he had a penchant for preaching to the poor, which included immigrants. The upper crust types at his church were less than pleased when some of these scruffy newcomers started showing up and sitting in ‘their’ pews. They offered to build a separate church for the immigrants, but Simpson wasn’t having it.
“He resigned and started a missionary organization. The outgrowth of that is the Christian and Missionary Alliance. It’s not large in North America, but we support a very large missionary organization around the world.” 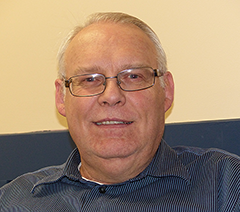