Residents and visitors in the area will have several Canada Day events to choose from when making plans for Canada’s 150th birthday on July 1. They include celebrations in Slave Lake, Canyon Creek and Smith.
Starting with Smith, SHARA and the M.D. of Lesser Slave River are teaming up to put on a free community barbecue at the community complex. It runs from 1:00 p.m. to 5:00 p.m.
Moving to the other side of the M.D., the annual Debbie Seppola Canada Day Parade goes at 2:00 p.m. in Canyon Creek and runs roughly until 5:00 p.m. Or rather runs smoothly until roughly 5:00 p.m. According to information online ‘music, food and fun,’ are promised to participants.
In Slave Lake, the Canada 150 festivities kick off with a pancake breakfast in the Abundant Life Assembly parking lot downtown (former Boisvert’s Super A site). This runs for about three hours, starting at 8:00 a.m. Just as the barbecue is winding up, a kid’s parade begins at the same location. It proceeds east on 3rd Ave. NE to Schurter Park.
Participants are invited to come to the ‘decoration station’ at the Abundant Life church at 10:00 a.m. to dress up their bikes, scooters and what have you. For more information, call 780-849-8028.
The main event in Schurter Park gets started at 11:00 a.m. and runs for about four hours. It includes the standard free Canada Day barbecue, served up this year by the Rotary Club.
A stage will be set up in the park. On it will be performances by the Richard Woodman band, Evan Crawford and an illusionist (also juggler and comedian) named Paul Isaak. The poster also mentions kids’ activities, but does not specify.
The day concludes with fireworks at the Slave Lake airport, starting at 11:00 p.m. 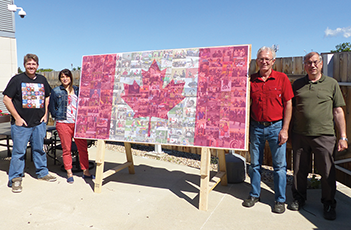 Challenge accepted: Town of Slave Lake admin department came up with a flag made up of photos from around town during 2016, after council challenged town departments to create something for Canada’s 150th birthday. 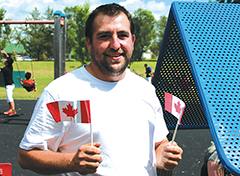 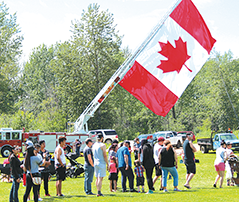