The entire staff present that evening came up and accepted the award but no speech was given.

According to the program, Slave Lake Dental was nominated based on their attention to detail and striving to improve the experience of patients and staff.

Brenna Emes won the Spirit of Slave Lake award. She won over Andy Assaf and Stage North. Emes was not present to accept. According to the program, She was chosen for this award due to her involvement with the Christmas Love for Ft. McMurray campaign and Santas for Seniors. Joy McGregor accepted the award on Emes’ behalf.

Ali Mouallem won the Business Person of the Year, edging out Billy Bremner and Doug Babiy. He was nominated for his involvement in several local community groups as well as growing and improving his businesses.

“Thank you very much,” Mouallem said.

Kal Tire took home the Business of the Year award, edging out the Rex Theatre, Sniper Communications and Wonderland Indoor Playground Cafe & Party. According to the program, Kal Tire was nominated based on their long history of success in business, charity work and support of local hockey teams.

Chamber president Francesca Giroux went on to present the gala results during the Feb. 26 chamber membership meeting. She explained that the gala went well. There were 205 tickets sold and all but one nominee were in attendance. She describes this as a positive result and a lot of the sales happened closer to the day of the event.
“That was a pretty good turnout,” Giroux said.

The practice of offering a free ticket to all nominees proved to boost sales, as it encouraged people to buy tickets for spouses.

Entertainment for the evening was provided by the Roland Tones, the jazz band from Roland Michener Secondary School. Giroux explains that this band was chosen out of a desire to provide another venue for them. 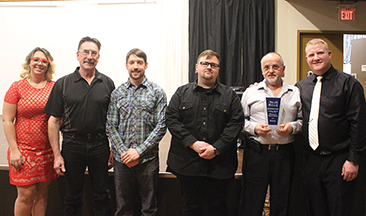 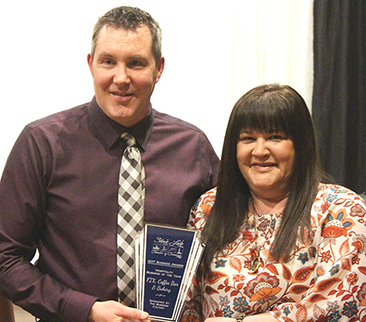 The FIX Coffee Bar & Bakery took home the Hospitality Business of the Year award. Pierre and Georgie Gauthier accepted the award, sponsored by The Business Factory. 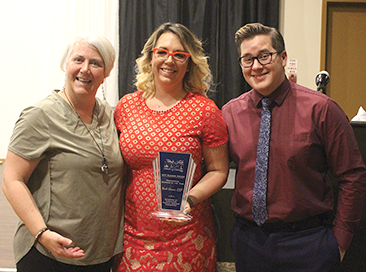 Nash Giroux LLP was the winner of the Professional Business of the Year award. Bonnie Nash, left and Francesca Giroux accepted the award from Slave Lake and District Chamber of Commerce vice-president Josh Friesen, for sponsor AFSC. 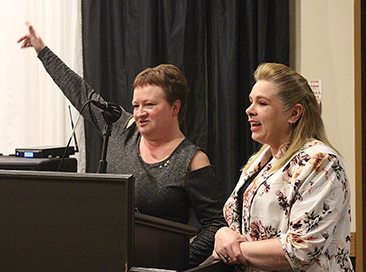