Kim Hughes, Interim Executive Administrator for the Chamber, Said Moonlight Madness, the Santa parade, and light up was a huge success. She said the parade saw over 30 floats.

Hughes said due to some pushback on the parade route not driving past the seniors lodge the Chamber will talk to and work with the town to try and please as many people as possible.

Hughes said this year the Chamber abandoned Passport to Christmas and Instead they held a window decorating contest to see which business got the opportunity to light the tree downtown in Citizens Park.

The contest was judged by the Slave Lake Animal Rescue Committee and the winner was Tim Hortons restaurant.

Vice President for the Chamber of Commerce Josh Friesen said the Chamber tried to put on a session with the government of Alberta on WCB-Bill 30. The sessions were designed to inform people about the WCB legislative changes in Bill 30 that took place throughout 2018.

Friesen said the session was cancelled due to lack of interest. He added the Chamber may look at hosting another in the spring when people have more time to commit.

Hughes said this year Atco will be judging the outdoor light competition. No one will need to register. Atco will be driving around everywhere from Slave Lake to Widewater to Canyon Creek to Mitsue looking for the top three best decorated houses.

The first place winners a $100 gift card, second place a $75 gift card and third place a $50 gift certificate. She added the Chamber will be advertising as soon as they receive a date on when Atco is able to go out and judge.

President Frankie Giroux spoke about this year’s Business Awards Gala. She said this year the gala is going to be March 9.

Giroux explained that the gala was usually held either the third or fourth week in February. This time the Chamber wanted to provide some space between another gala that is going on with Northern Lakes College and Family Day. She said they are currently out for bid on a couple of locations for the gala and they have a committee working on that.

Giroux said the Chamber will be releasing ticket information in January along with the nominations. She added this year the nominations will be online via the chamber website only, due to lack of paper responses received last year.

“Last year we received over 145 online nominations for the 13 various categories and we yielded zero paper nominations.”

Giroux said they will release more information closer to the event and put out a “save the date.”

Friesen brought up the trade show as an important item that needs to be discussed. He said the trade show committee is in desperate need of volunteers.

Friesen explained that it is a lot of work to put these big events together and the events do draw a lot of people. He added that last year had a really great turn out.

“Even if it’s in the smallest bit with one section of marketing or calling up businesses,” said Friesen. “Everything done makes it a lot easier on our committee of two people.”

Friesen said they would hate to not be able to put on the trade show due to lack of manpower. He added last year they only had three people and it was too much work. 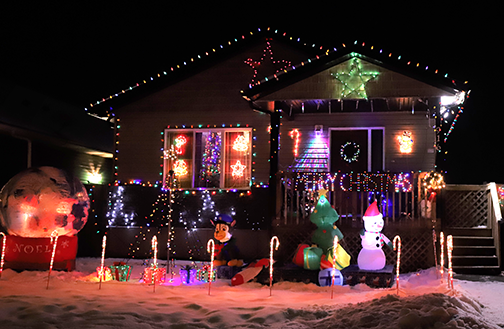 The Chamber of Commerce annual outdoor Christmas lights competition is on, and will be judged by Atco Electric. This is just one example of what is out there – a display on 10th Ave. Southeast in Slave Lake.