Three major things are going on at the Slave Lake & District Chamber of Commerce these days. Two are event-planning and one is hiring a new manager. Chamber president Francesca Giroux provided an update on all three for The Leader last week.
On the hiring front, Giroux said interviewing for the position was going on “this week,” (meaning last week). She expected somebody to be hired by the end of the week, which could mean they are in place already this week. Or if not this week, then soon, with the office in the Plaza 2000 re-opened for regular business.
Awards gala
The new manager, whoever he or she is, will have plenty to do. The annual business awards banquet is coming up on Feb. 24. Giroux says it will feature a three-course meal with wine pairings, plus local entertainment by Stacy Stiles and a high school jazz band. The latter is likely the ‘Roland Tones,’ who burst onto the scene and made a good impression at a Christmas concert last month.
And of course the awards. Speaking of those, Giroux says there are two new awards this year. There’s the Entrepreneur Under 40, sponsored by Northern Lakes College and the Home-Based Business of the Year, sponsored by Joy McGregor.
“Nomination boxes and online nomination will be available next week, as well as tickets,” Giroux says. “Just a reminder that it is extremely important to nominate businesses; all nominations come from the public!”
Trade show
The other thing in the planning stages is the spring trade show, re-branded this year as the ‘Outdoor Adventure Show.’
“Dates are May 4, 5 to be held at the MRC,” says Giroux. “At this point we will also be having several dealerships in town holding their annual sale in partnership with our Outdoor Adventure Show.”
Early-bird registration for the show opens this week as well. 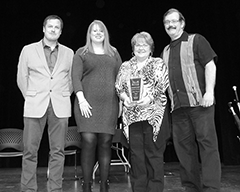 Water Pure & Simple winning Business of the Year at the 2017 awards gala.