Home News Cold, but maybe not cold enough to stop the pine beetle

Questions have arisen in recent days about how the cold snap over the holidays might have put the boots to the mountain pine beetle. The Leader asked pine beetle expert Jennifer MacCormick that very question. The news was not as good as we were hoping.
“According to research,” says MacCormick, who works for Alberta Agriculture and Forestry in Slave Lake, “you would probably need it to be minus 40 for a week,” to kill off the pine beetle.
Whether minus 30 for a week (more or less what we got) will have much of an effect, researchers won’t know until the spring. That’s when they do what they call a ‘population forecast survey,’ MacCormick says.
“We cut a cookie out of the bark,” she says. “Four per tree.”
The cookies come back to the Alberta Ag & Forestry office in Slave Lake, the bark is peeled off and the number of pine beetles (adult, larva or pupa) are counted, and their condition.
What’s happening now is crews are visiting sites identified in aerial surveys in later summer and early fall of last year. If they find infected trees, they’ll cut and burn them on the spot, or ‘control’ them, as it’s called.
Last year in the Slave Lake District just over 21,000 infected pine trees were ‘controlled’. This winter’s numbers are not in yet, but MacCormick estimates around 17,000. Folks in the Edson area are estimating 14,000. The Grande Prairie area destroyed close to 42,000 trees last year and expects to do another 30,000 this winter. 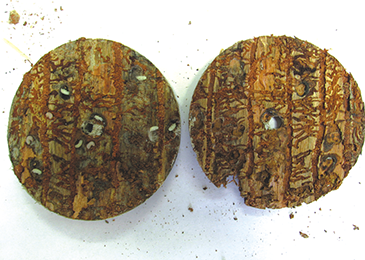 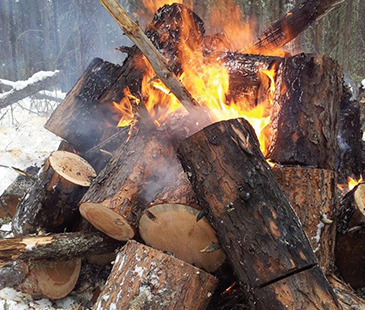 A burn pile of infected pine wood. This is what is going on this winter at sites identified last year. People check them out on the ground and if they are confirmed as infected, down they come and up they go.