The Holiday season and cold spell kept the Lesser Slave Regional Fire Services busy with several calls to duty.
Fire chief Jamie Coutts says firefighters had to deal with frozen sprinkler systems in two hotels, the Big Lakes Inn and the old Travelodge Hotel. The frozen sprinkler system eventually caused flooding. The systems were shut down, which allowed for cleanup to begin.
Coutts explains that to fix the problem, firefighters had to cut into the roof as well as some walls. There was some water damage found. Water got into door frames. He was not sure how much damage was caused or how much it would cost to repair.
The fire chief reports that they had to deal with a lot of home security alarms going off. These alarms kept going off in the cold conditions. Steam kept setting them off. He called this nuisance alarms. It takes up a lot of people power but does not cause trouble.
“That part is always bad,” he says.
Crews had to deal with a haz-mat leak. A tanker truck pulled into the Walmart parking lot and the drive shaft had knocked out a couple of the cooling lines. All of the truck’s coolant was dumped into the parking lot.
The truck was hauling oil from Canyon Creek to southern Alberta. None of the oil was spilled, only coolant was. The fire department’s quick response resulted in a speedy clean up and a minimized environmental impact. Crews had to complete this task when it was -34 out.
“It was brutally, brutally cold for everybody,” he says.
Coutts says there were no real complications when they responded to any of these calls other than the weather. Firefighters feel the cold too and don’t have any special way to shield themselves from it. They had to worry about frost bite and make sure the tools and the fire truck worked properly.
Firefighters do have some extra gear to wear in the winter, such as extra gloves and neck warmers. There are pouches to put in gloves and boots. They are able to dress warmer under their firefighting gear as well and have thermal airing.
That said, their helmets are not as warm as a toque and the gloves themselves are leather firefighting gloves and are not insulated mittens.
Although there was activity, Coutts says it could have been a lot worse. No injuries were reported.
Coutts was surprised that there were no house or trailer fires. He says those are common occurrences in the cold. Pipes usually freeze and people try to thaw out the pipes with hair dryers and heat guns.
Coutts offers some tips. He says that when temperatures drop to -30 or -35 it is important to keep heaters fully working to better prevent freezing. Heaters should be in good working order. If you have a fireplace, it should be in good working order and properly cleaned.
“I think it’s always a matter of trying to bridge the gap of saving money when it’s cold and making sure you have enough heat,” he says.
When it comes to vehicles it is important to warm them up before using them. Vehicles should be plugged in. Coutts explains that people rush into their car, the windows end up fogging up and the result is a collision.
Coutts said a lot of these tips should be common sense but overall he suggests to think through decisions and consider consequences. 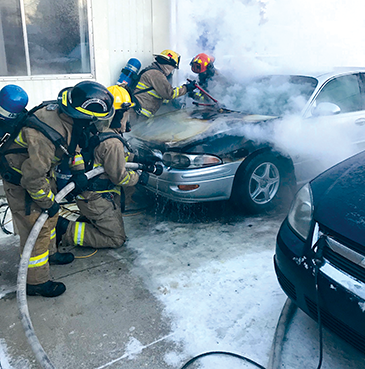 Another victim of the cold: firefighters douse a car fire on Jan. 2.