About 38 volunteers turned out for the annual Marten Beach FireSmart Community Clean-up Day on Aug. 19. Together with Regional Fire Service and Alberta Ag and Forestry HAC crew members, they tackled dead and fallen wood in several zones around the community. Another part of the program was chipping and hauling off brush that residents had cleaned out of their private lots and piled by the side of the road. This was done by the regional FireSmart crew and equipment. As for the piles of wood in the public areas in and around the community, Forestry crews will return in winter to burn them. This has been going on for about four years in the hamlet on the lakeshore north of Slave Lake, with good turn-out each year from community members, in partnership with the two firefighting agencies mentioned above.
“It was a well-attended, high-energy and positive results event,” says FireSmart Coordinator Brandy Walters, who facilitated the event in partnership with community volunteer coordinator Dan Tarney.
“Thanks to everyone for taking part,” says Tarney. “And we hope to see you again next year!”
Summerwood
A similar community fuel reduction work bee was planned for this past Sunday in Summerwood. That’s the new-ish neighbourhood carved out of the bush near Gilwood Golf Course. Cleaning dead and down timber and thinning spruce trees on properties
The whole idea behind FireSmarting is to reduce the amount of fuel available for a wildfire, should it come through. Given what happened to Slave Lake, Widewater and Canyon Creek in 2011, both hamlets are considered quite vulnerable.
There are two distinct parts of the FireSmart program as far as those hamlets are concerned: what happens on public land and what happens on private land. The authorities have no jurisdiction over private land, so the focus there has been on education and encouragement. FireSmart assessments are available, by which properties are given ratings based on a number of criteria – everything from siding and roofing materials to how firewood is stored. Thinning coniferous trees is strongly recommended, as is trimming their limbs up to a height of six feet.
On the public land, it’s a matter of removing all the dead wood, along with thinning. In most conditions, fire officials say, a fire moving through a dense stand of spruce or pine trees will at least slow down when it comes to more widely-spaced trees. This will give the water bombers a chance to slow it down further. In extremely dry and windy conditions it might not make much of a difference. What can, though, is to have tin roofs and fire-resistant siding when the flaming embers start dropping on your cottage or home. 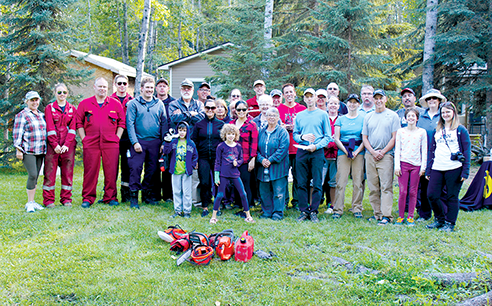