Home Events Community pitches in, cleans up a lot

Pitch-In Week in Slave Lake was still going on when this paper was put together, so chief organizer Jill Shepherd of the Town of Slave Lake didn’t have final numbers for us. But she was pretty sure the amount of garbage collected was big. For one thing, more people were doing it.
“We had 49 groups signed up this year,” she said. “We had 29 last year. We already filled up our three dumpsters.”
Shepherd says she isn’t sure if it’s really the case, but it seemed to her as if there was more trash lying around the community this year than in the past few. There certainly was a lot, and not all of it got picked up during Pitch-In Week.
But that’s okay! The town still has bags to hand out for anyone wishing to pitch in this week or next or whenever.
“As long as supplies last,” Shepherd said.
In other community beautification news, Shepherd – who is the town’s program coordinator – says she has some sort of year-round community clean-up promotion in mind. She hasn’t figured out yet exactly what it will look like. But the goal would be something that would result in less littering and more cleaning up throughout the year.
“If you’ve got any ideas, please call!” she said.
Meanwhile, various clean-up efforts were going on also in M.D. hamlets, but details were not available by press time. All we know for sure is a group from the M.D. office cleaned up an area in Wagner, overlooking the lake. 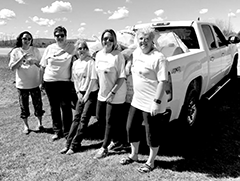 The crew from Nash Giroux: doing their bit. 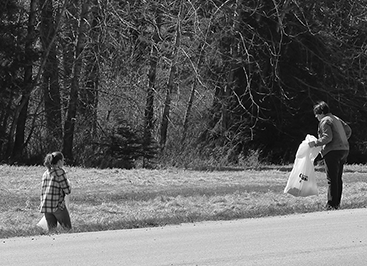 Caught in the act: students cleaning up along the south end of Main St. in Slave Lake. 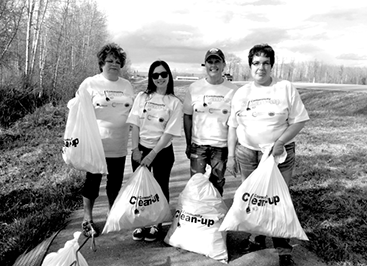 This group, calling themselves the ‘Perogie Pinchers and Oil Wives’ cleaned up along the walking trail in Slave Lake. Pictured are Audrey Vanin, Nicole Paleck, Dawneen Ball and Dee Busk. Not pictured (probably because she’s taking the picture) is Marianne Paleck. 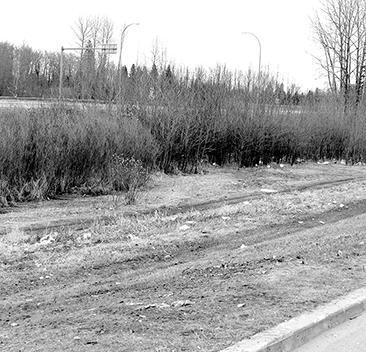 But what about this unsightly mess? As usual, some areas badly in need of attention were missed or ignored. The ditch alongside Hwy. 2, west of the Cornerstone shopping centre (much worse than it looks in this photo) had not been touched as of Friday morning. 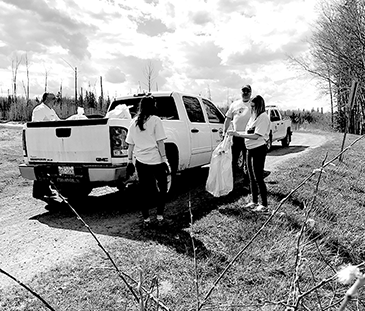 An M.D. of Lesser Slave River crew cleaning up at the lookout on Southshore Drive. Photo courtesy Keith Smits. 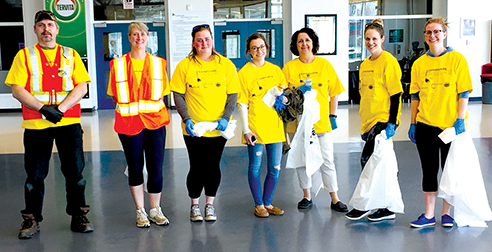 The Town of Slave Lake crew, all decked out and ready to go.