Home News Construction underway on regional waterline, intake station and 17 km of pipeline to be fully operational by August

The Widewater intake station and regional water line will provide Slave Lake with another source of water for the treatment plant.
Town project manager Doug Baird explains that the project will see both a water intake station built near the ball diamonds in Widewater and 17 km of waterline from the station to the water treatment plant. The water is pulled from Lesser Slave Lake.
The purpose of this project is to provide an alternate source for water intake. This would serve as a second option to the intake station on Lesser Slave River and Baird explains that the town was looking at an alternative because the river has had a risk of compromise. This is because of low water levels and blue green algae blooms that have formed in 2002. Town CAO Brian Vance says the blooms caused a scare, but there was no contamination.
“It is meant to be a back up,” Baird says.
Baird explains that the idea will be to use the river in the winter, when water quality is better, and use the lake during the summer.
Work has begun on both parts of this project. The floor portion of the intake station that is below ground has been installed. Baird calls this the “cellar.” Three out of the six underground walls have been poured and the other three should be completed sometime in the next three weeks.
Of these six walls, four form the outside walls. The other two will crisscross on the inside to act as a separator.
Baird hopes for the cellar to be completed with the main floor covering it by end of February. The intake station is expected to be completed and up and running by August.
For the waterline itself, there has been surveying done. The next step in the process will be cleanup along the route and doing brushing. Baird reveals the surveying began last week and the cleaning and brushing will begin soon.
Overall, the waterline is projected to be finished by June 1.
Baird says the installation of the water pipeline is done best in the winter. The frozen ground better handles the heavy machinery.
Baird says the town did surveys of multiple areas along the lake. The intake station site was found to be the optimal location because the area has nice clean water. The water will be taken 800 metres off the beach.
Since the water in the station will be raw it will not be used for tap water until it is treated.
“It is not potable water,” he explains. “There is no treatment going on there.”
Once treated, the water will not be cycling back to the Widewater area. This water will be used to service Slave Lake and surrounding area.
“That existing infrastructure comes out of our water treatment plant already,” he says.
That being said, water from the intake station will be used to supply water to the fire hydrants in Widewater.
Neither Baird nor Vance foresee any challenges moving forward.
Vance says the project will cost $17.6 million. The town received $15.5 million in provincial grants, with the town having to pay the remainder. 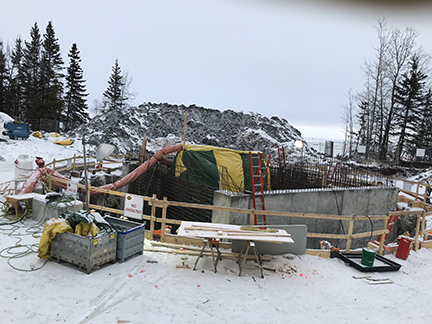 Pictured here is the site of the intake station being built near the ball diamonds in Widewater. The station is expected to be up and running by August.

Photo courtesy of the Town of Slave Lake