It was great to have curling back in our community after taking a year off. With a few phone calls and dedicated players, we had 14 regular teams curl this year. It was a mixture of ladies, men, and family teams. It was much fun curling against the younger children and teaching them some tricks of the game!
Our after-school program saw around 30-35 students. We changed things up a bit this year and did some skills before playing a few ends. Out of this we now have a junior team that did extra practice on Monday nights.
The year ended with a glow in the dark game and supper. Thank you to Everett Samuelson for coming out and helping. The extra hands were greatly appreciated.
Our club holds four bonspiels. The first was the Skeeters, a one-day tournament for Grades 3 and up. This was held in December and there were 44 curlers. All the curlers had a great time. The curlers were rewarded at the end of the day with awards, supper, and a dance. Thank you to all the curlers for your sportsmanship and enthusiasm.
Next bonspiel was “Tailgate Party”. There were 15 ladies’ teams that curled, drank, ate, laughed, partied, danced, sang, reminisced, and can’t wait till next year. The Amy Saitz rink won first in the ‘A’, beating out Barb Severson’s rink. The Brittany McLaughlin rink won first in the ‘B’, beating out Ashley Reade’s rink. Deanna Sloan’s rink won first in the ‘C’, beating out the Pam Morrison rink. Other than a few mascots going missing….it was once again a big success. We thank all the teams that came from out of town and to our local teams for always making this bonspiel the best!
Since it was St. Patrick’s Day, the men’s bonspiel was served green beer and a shamrock cake. There were 12 teams entered and once again the building was rocking. Chase Labby’s rink won first in the ‘A’ over the Barry Boisvert rink. CM Forestry won first in the ‘B’, beating out Richard Davis, and Max McGregor took first in the ‘C’, beating out the Peter Chon rink. Thank you to all the teams from out of town and to our local boys for making this bonspiel a success.
Last but not least…. ‘The Loggers’ and wow….did we ever go out with a bang!
Twenty-eight teams took part in our Loggers Bonspiel this past weekend. All of them local teams! (with curlers from out of town joining the locals) We started on Thursday with two draws, Friday with six draws, Saturday with another six and ended up Sunday with five draws. It was a lot of curling for our three sheets of ice.
Steve Gladue’s rink won first in the ‘A’, beating out Chase Labby. The Dean Doerksen rink won first in the ‘B’, overr Brian Sheldon. Winning the ‘C’ Event was the Richard Davis rink, over Ian Churchill’s team. (Even the hockey helmet didn’t help the Ian Churchill rink!) The band played some awesome music at the dance, the kitchen put out some great food and of course the bartenders were hopping!
We can not thank our sponsors enough for helping support our bonspiels. And of course, a huge thank you to the Ag Board of Directors and all the other volunteers that help make these events successful. To our secretary, janitor, and kitchen staff we appreciate the extra you do for us when it’s bonspiel time. And I’m not too sure how we thank our ice maker. Gerry Doerksen has been making the ice at our rink for 15 plus years….he is 80 years old. If it wasn’t for his dedication this year and to our regular curlers, curling would not have happened. We appreciate you Gerry. Rock on, Kinuso curlers and see you next year. 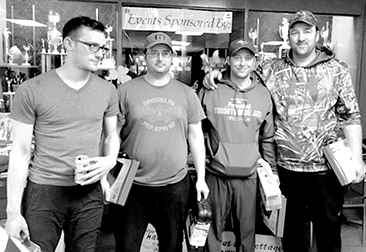