Surprising no one, the Lesser Slave Lake NDP Constituency Association last week announced the nomination of incumbent MLA Danielle Larivee as the NDP candidate in the next provincial election.

It was possible, of course, that one term would have been enough for Larivee, who also looks after Children’s Services and the Status of Women in the cabinet of Premier Rachel Notley. But as of about 2:00 p.m. on Sept. 17, her return to the campaign trail became official. It probably became that way the day before, when the constituency association held its annual general meeting in Slave Lake.

“Lesser Slave Lake has been my home for nearly 40 years,” said Larivee in the Sept. 17 release. “It’s where I grew up, practiced nursing and raised a family, and it’s been an honour representing the incredible people who live here.”

Larivee said she chose to stand with Rachel Notley on the side of everyday Albertans, standing up to calls for painful cuts to public services.

“Rachel Notley has stood for integrity, an end to entitlement, and bringing government back to the people,” said Larivee. “I will continue to fight to make sure we have the teachers, nurses and roads our communities need.”

A provincial election is expected in the spring of 2019 and those who would replace Larivee in the Legislature are already jockeying for position. The Alberta Party was first out of the gate, when it announced Judy Kim-Meneen of TallCree as its Lesser Slave Lake candidate (See ‘Meet your Alberta Party candidate for Lesser Slave Lake’, at lakesideleader.com). The United Conservative Party is still involved in its candidate selection process, with four people (last we heard) vying for the position.

And the provincial Liberals? No word yet from that quarter. 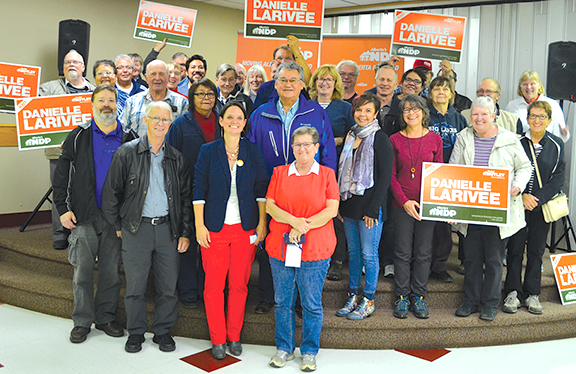 The candidate, front and centre, with her team of supporters at the Lesser Slave Lake NDP Constituency Association Annual General Meeting on Sept. 16.