Home Uncategorized Directing traffic from above in a bird dog plane

How does somebody become an air attack officer? There are probably a variety of ways that somebody ends up directing traffic over a wildfire, but for Mark Missal it began fighting fires on the ground when he was a university student.

“I was attracted to fire,” he says. “I was a ‘ground pounder’ for a dozen years. One day I looked up (and thought), I’m covered in dirt, they are dropping on me and I bet they’re going back to a hotel with a bed.”

That was one thing. Another was a summer when it was raining all the time and he was living in a tent. Having a teaching degree, he figured he might as well use it and told his bosses he was going back to teaching.

“They said, ‘No, no! How would you like to ride around in the back of a bird dog plane for the rest of the summer?’”

So he did. And he liked what he saw. Much training followed and he became an air attack officer. Those are the men and women – usually the second ones at a wildfire – who assess the situation, make a plan for air attack and direct the air tankers and helicopters in that attack. Sometimes, the decision may be to call off the attack altogether.

“For example this year at Lac La Biche it was just too angry – fire tornados.”

This year Missal has been mostly based out of Lac La Biche with a tanker group there. It’s been active all over the province – from Fort McMurray in the north to Calgary in the south. He usually works 15 days at a stretch. That’s a far cry from the way it was when he started back in the 1980s.

A big part of the success of any air attack officer is the pilot who sits beside him, and Missal makes a point of sharing the credit.

“Type ‘A’” is how he describes their personalities. “They think very fast.”

Many are ex-crop dusters and have worked all over the world. Some are ex-military and some have been commercial pilots, who he thinks got bored doing that.

“Bird dog pilots are worth their weight in gold,” he says.

Training is a big part of what Missal – as one of the senior AAOs in the province – does. He says the average career of an air attack officer is about five years, so there’s almost always somebody in training.

“The next generation, they’re frickin’ good!” he says. “I think they’re much further ahead than I was at that point in my career.”

Technology helps. There’s the Forward-Looking Infrared Radar (FLIR), that can pick out hot spots through smoke. Communications are way better than they used to be, Missal says.

“For example, I can text pictures back to my tankers, to show them where to drop.”

Missal says the very first fire he worked on as an AAO was in the Grande Prairie area, using old B-26es as bombers.

“We dropped on a fire truck,” he says.

It’s a small club. There are only 26 air attack officers working in Alberta and he figures 150 to 200 in Canada.

Missal and his colleagues are liable to be called on to work in other provinces or even U.S. states, thanks to mutual aid agreements. One two-hours’ notice he could be called away to Alaska or Quebec, and it has happened. Firefighter can be very different in some of those places – the B.C. mountains, for example.

“They love borrowing our tankers,” he says. “We impress the hell out of them.”

Missal has been at the job for about 30 years and is moving up the ranks of seniority in the province.

He figures he’s third on that list now. He’s still enjoying it. Does he recommend it as a career choice?

“If you have a passion for it and your stomach can handle it,” he says. 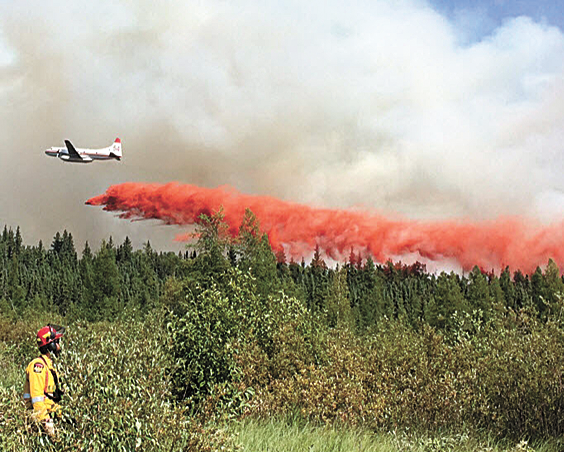