Last week, Slave Lake town council wrestled further with the question of whether to approve a patio for a commercial business located in an industrial area. It required a bylaw change, since such uses have not (til now) been permitted. As usual, the question of setting troublesome precedents was a consideration. Competing with that was the desire to encourage – rather than discourage – a new and growing business.
The business in question is Dog Island Brewing Company, located on Caribou Trail on the west side of town. Its brewing component has already been approved. The patio item was left out of the original bylaw, to be dealt with separately. This triggered another public hearing, at which proponent Ben Fiddler said: “It’s just a patio.”
From the point of view of the planning department, it’s much more than just a patio. The basic principle involved – that retail uses should be discouraged in industrial areas – is a sound one and should be observed.
“You’re setting up a situation that can’t be controlled,” warned Laurie Skrynyk, the town’s planning and development director in her brief for council.
“I struggled with this one,” said mayor Tyler Warman. “A patio in an industrial area doesn’t make sense to me. But businesses have to grow.” In the long term, Warman added, “I want to see them migrate downtown.”
That’s the other big issue: the town is investing considerable time and money in figuring out how to stimulate growth in the downtown core. One way to do that is to create zoning incentives for businesses to locate there and stay there. One way to subvert that is to allow retail or other uses in industrial zones. The Dog Island tap room is a good example of that.
However, Fiddler assured council the company’s goal is to move its tap room downtown “in three to five years,” leaving the brewing facility in the industrial shop.
“Let’s give it a shot,” urged councillor Mark Missal. “I really don’t see a problem occurring out there.”
Councillor Phil Lokken didn’t see a problem in denying the change.
“It’s not a question of picking on them,” he said. “The planning department is looking at the overall picture.”
The planning department cautioned councillors that if they approve the use, they might be seeing other similar applications from industrial areas.
In the end, council approved the bylaw change permitting the patio by a 4 – 2 vote, with councillors Lokken and Brandle opposed.
With that out of the way, Dog Island now will present the specifics of its patio project to the Municipal Planning Commission. If it approves, construction will begin immediately, brewery partner Chad Paulson tells The Leader. 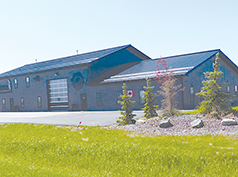