The Landon Persson Memorial Off-leash Dog Park celebrated its one-year anniversary last month. The Leader chatted briefly with Slave Lake Dog Park Society director Rebecca King about how the park is doing since opening its gates in 2016.
“It’s been great!” she says. “We’ve put in a new bench, cut down two trees and installed poop-bag dispensers.”
According to King, even with the park’s trees and shrubbery being donated, the cost of opening up the park was well over $5,000.
“Our approximate cost to open the dog park monetary wise was around $9,000,” she says. “Trees were all donated so it was just the cost of fencing materials and benches.”
King says the park is entirely run by the dog park society, which is quite small in stature at the moment.
“We are a small group – very small,” she says. “The grounds maintenance is all done by volunteers. We’re always looking for people interested in helping and we need to fill our treasurer position.”
The group meets every last Monday of the month at the new fire hall on Caribou Trail. King says the society’s Facebook page is always updated if that changes.
Can we look forward to anything in the upcoming year?
“We’re looking into grants for a permanent agility course as well as maybe sectioning off a small part of the park for smaller dogs,” she says. “Dog training sessions are also in the works and we are hoping to get donations and plan to fundraise for basic equipment for the dogs.” 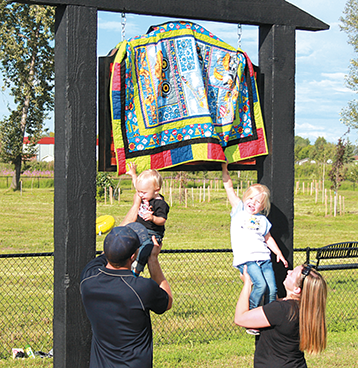 Parents and siblings of the late Landon Persson unveiling the dog park’s sign last year at the grand opening.