It may come as a surprise to some downtown Slave Lake business owners – or maybe not – that there are rules regarding the way your business can look. And that sooner or later, the town may get around to enforcing them.
One who learned that lesson recently is Bobby Halliday of Bobby & Associates, the accounting firm located at Main St. and 3rd Ave. NW. For four years, Halliday had coverings over the large windows. They served the obvious purpose of advertising – rather loudly, in the opinion of some people. But they also were there for two other reasons, which Halliday explained to The Leader.
One was, “To protect the confidentiality of our clients,” she says.
The second, related reason is for the health of her employees. Having those screens on the windows allowed them to see out and sunlight to come in, while providing the privacy noted above. Having been forced to remove them, the only option is to close the blinds, she says, which leaves her employees without the view or the sunshine.
Halliday says she understands the reasoning behind the urban design regulations for the appearance of downtown retail businesses. The town wants to insure that they are attractive to window shoppers, thus helping to draw people into the downtown.
“But we’re not retail,” she says.
Halliday has problems with how the town handled the process of informing and enforcing its rules in this case. But that aside, she simply disagrees with the rule banning such window coverings.
“Other towns allow it,” she says. “I feel it’s unnecessary.” Not to mention a waste of taxpayers’ money, she adds.
The town’s view, needless to say, is that the rules regarding the ‘look’ of downtown are legitimate, necessary and defensible. In this case, town planning and development director Laurie Skrynyk points out that Halliday’s case for her window coverings went through proper channels. First the Municipal Planning Commission ruled against it; Halliday appealed that decision, the Subdivision and Development Appeal Board heard it and rejected her appeal. That was in March of 2017. Halliday was given until Dec. 31 of this year to remove the coverings. Case closed.
Regarding the argument that the rule against window coverings should not apply to non-retail business, Skrynyk has this to say:
“It would be difficult, if not impossible, to create different regulations for the vast array of different uses that could occur in any land use district. As such, the rules for the district in this case would apply to any business operating in the downtown core regardless of whether it is a retail store or an office.”
Halliday, meanwhile, is making plans to move out of the downtown area. 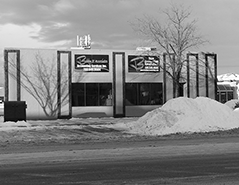 Bobby & Associates, without the window coverings. 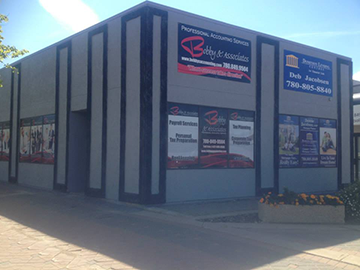 Bobby & Associates, before the non-compliant window covering/ads were removed.