Community members flocked to the Boreal Centre of Bird Conservation (BCBC) late last month for an interactive lesson about geology.
Alberta Parks visitor services co-ordinator, Ceiridwen Robbins, says the afternoon had a pretty large number of people in attendance.
“We had a great turnout for the presentation – 49 people!” she says. “I think that says a lot considering how many other cool things were happening in town on Saturday. Dr. Murray Gingras was great; he was able to explain complex geological concepts using analogies and non-technical language to engage a wide range of people from children to seniors.”
Robbins adds, “He brought some rocks and fossils from the University of Alberta for people to look at and touch, including samples of the oldest known rock in the world (Acasta gneiss from the Northwest Territories), oil sands from Fort McMurray, and a trilobite fossil. Several people brought some special rocks from their collections at home that he was able to identify for them.”
Gingras and others went on a hike around the BCBC to learn about its own geology makeup.
“We had 26 people for the hike; the beach below the Boreal Centre for Bird Conservation is quite different from Devonshire Beach and the Marten River Beach – it’s more cobblestone than sand,” says Robbins. “The rocks along it have been brought here by the glaciers 12,000 years ago and by rivers since. Many are from the Northwest Territories and the Rocky Mountains. We had a scavenger hunt for youth which encouraged them to look closely at the rocks and other things on the beach.”
According to Robbins, fun was had by all and because of such a great turnout, another presentation and hike with Dr. Gingras might be in the works.
“Everyone, from kids to adults, was encouraged to keep their eyes open for interesting rocks, which Dr. Gingras was able to identify on the spot,” she says. “Since we are in a provincial park and those rocks prevent shoreline erosion and provide habitat for plants, insects, and young fish, they did have to be left behind, but everyone had a great time seeking out the most interesting stones and pebbles to show off to everyone else before placing them back on the beach. Dr. Gingras said he had a great time and would be happy to come again, so we may see him again in the future.” 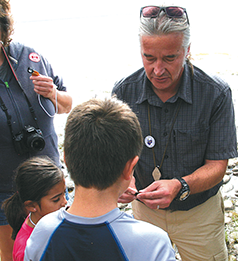