Home News Eagles get a break in pipeline plan

Terry Kristoff contacted me earlier in February with concerns about the waterline construction taking place by his house. The planned route was in close proximity to a well-used eagles nest between his house and the MD landfill road (south along the Highway 2 right of way).

I contacted Doug Baird, Project Manager from the Town of Slave Lake about the concerns, and Terry and I would like to thank the Town and their contractors for their quick response to our concerns. They immediately stopped work, until they could assess the site and came up with a plan to minimize their impact on this nest. As a result, the project changed the plans for the construction, and they have now incorporated a buffer around the nest site, and also planning to go underground for a section near the nest to lessen the impact.

At the time, the eagles were gone; they returned last week but haven’t started nesting yet. So they are trying to complete their construction work in this area as quickly as possible. Other people had also contacted me with the same concerns for the eagles nest over the past few weeks, and they really appreciated hearing that the town had responded so quickly to help protect this nesting site. 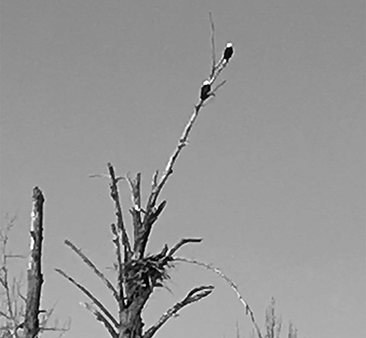