The E.G. Wahlstrom School drama club is on track to perform its second musical next month. According to facilitator Andrea Avery, the kids will be acting out Roald Dahl’s 1964 children’s novel Charlie and the Chocolate Factory.
“We picked out this show (Willy Wonka) because it was fun,” she says. “The kids recognized it and therefore could be excited about it. And who doesn’t love making giant candy?”
Avery says students have been hard at work on their roles leading up to the June 1st show.
“Rehearsals are going great!” she says. “We have about 50 students and eight adults working on the school. The students are ‘off-book’ and are perfecting scenes, songs and dances. We’ve added a prop department this year and have several students and adult helpers dedicated to making our props, backgrounds and sets.”
Last year the club made its debut with ‘High School Musical’ and Avery said this year’s performance is shaping up to top that.
“We’ve been overwhelmed by the support in our community,” she says. “From the very start of our club this year, we were touched that Friends for Learning donated enough funding for us to run our show and make it a ‘pay what you can’ production so that our whole community could afford the opportunity to take in local theatre.’” 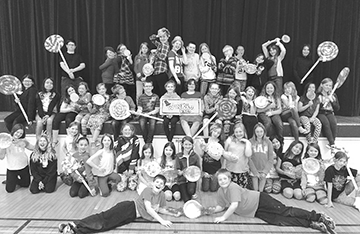