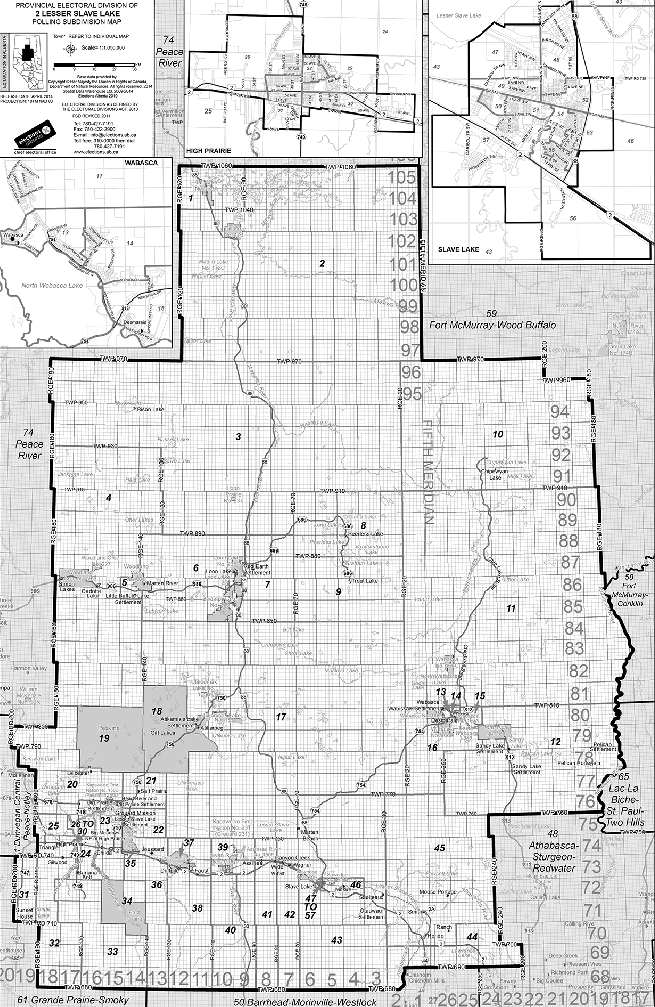 The current boundaries of Lesser Slave Lake: it has too few people.

The shape and size of the Lesser Slave Lake provincial electoral district may be different by the time the next provincial election rolls around. Likely it will, given the mandate of the Electoral Boundaries Commission, which just finished a round of hearings on the topic, one of which happened in Slave Lake on Feb. 23.
The commission will make recommendations; it’s up to the legislature to pass them.
At least one of the presenters at the Feb. 23 session hopes the borders will stay the same. That was Ken Vanderwell, representing the Progressive Conservative Association for Lesser Slave Lake. He urged the commission to give LSL credit for its unusual position (huge geographical area, for one thing) and leave it be. There’s a fear, he said, that, “We could be split up and added to constituencies to the east and west of us.”
The constituency already has special status that allows it to have fewer than the usual number of constituents – or rather to be outside the variance from the average allowed of most districts. Commission chair Justice Myra Bielby acknowledged that in her preamble, adding that with only 27,000 people, Lesser Slave Lake is not beyond the variance allowed in its special status. The average constituency population in Alberta is around 47,000 people.
What could be done, Bielby said, is “move the border south to pick up more population, if that can reasonably be done. But we don’t know if it can be and that’s why we’re here.”
Two representatives of the M.D. of Opportunity recommended exactly that. Everett Gottfried of Wabasca and Clarence Cardinal of Calling Lake told the commission they’d like Calling Lake to be in Lesser Slave Lake. It’s in with Athabasca-Sturgeon-Redwater now.
“It would make sense to be in a First Nations region,” Gottfried said.
However, that would only add about 500 people to Lesser Slave Lake. Bielby speculated whether it would make sense to put the town of Athabasca in with Lesser Slave Lake. Of course if that were done, she said, Athabasca-Sturgeon-Redwater would have to poach population from somewhere else, because it’s already well-below the provincial average.
“There’s a ripple effect across the whole province,” she said.
The other delegation at the hearing was from Aspen View School Division. Superintendent Mark Francis did not have any specific electoral boundary suggestions, but urged the commission to take into account the “unique geographic and population issues,” faced by such jurisdictions as Aspen View.
Such as?
“Population shift to the cities,” Francis said. “We lose voice.”
The commission makes its recommendation to the government in May of this year. Following that is another round of public consultation on whatever those recommendations are. The final report is due at the end of October. Any changes to boundaries would presumably be in place well before the next provincial election.