As promised in last week’s edition of The Leader, here’s a recap of the Slave Lake and District Chamber of Commerce’s annual spring trade show.
“I think it went great!” says Chamber president Brittany Giesbrecht. “The exhibitors were all happy and so were the people who attended. It was neat – there were a lot of interactive booths and contests.”
Giesbrecht says this year’s two-day event brought in more vendors than originally anticipated.
“We were completely sold out and we had to rearrange the layout to fit more,” she says. “We had 75 exhibitors which is more than we had last year. We also had more vendors in the farmers market area.”
As for shopper attendance, Giesbrecht says Friday night wasn’t at its usual numbers.
“Friday night is usually the busiest,” she says. “I figure the hockey game and nice weather had something to do with that. But, I was at our (the Chamber’s) booth on Saturday and it looked pretty busy.”
Giesbrecht adds, “There were more people there than what I expected – especially from out of town.”
According to Giesbrecht, not much was changed this year to the trade show’s format.
“We didn’t make any real changes except the location of the stage,” she says. “We’ve received nothing but good feedback from everyone.”
The Chamber’s goal for the next trade show will be to attract a larger number of vendors and to try out a theme.
“The plan is to get back to filling two arenas,” says Giesbrecht. “We also have talked about having a theme the same way High Prairie does with the Gun Show and how other places do with health and wellness. We don’t have one picked out yet but it will probably be an outdoorsy one that fits in with the Slave Lake lifestyle.”
Riverboat Daze next
With the trade show behind them, the Chamber’s attention is now on organizing the annual Riverboat Daze celebration. A few editions ago, your Leader reporter gave readers a glimpse into what you can expect this year. In it, Giesbrecht says, among other things, that the Chamber won’t be handling its usual fireworks show.
“There is always some confusion when the fireworks are happening because Riverboat Daze is the weekend after Canada Day. But we decided to take a step back this year because of it being Canada’s 150th birthday. So we will not be having fireworks.”
Giesbrecht says the funds usually allocated for the fireworks show will be put towards other weekend attractions.
“We’re making big changes to Riverboat Daze!” she says. “We want to bring back old activities and change things up – make it a real family-friendly community event and pack a lot into the weekend.”
Giesbrecht adds, “We’re thinking of moving the parade to the Friday and when and where it ends will be the block party. Ideally we’d like to have the SandBlast competition on the Saturday and the goal is to change locations of the midway to Phoenix Heights.”
Bringing more foot-traffic downtown is one of the major goals of this Riverboat Daze, so says Giesbrecht.
“It’s still in the very early stages of planning but I think we are going to have a great weekend,” she says. “We have a really good committee and we’re trying to piggyback off the downtown revitalization plan. We’re open to ideas from individuals and groups and hope they attend our public planning meetings.”
For more information, contact 780-849-3222 or [email protected] 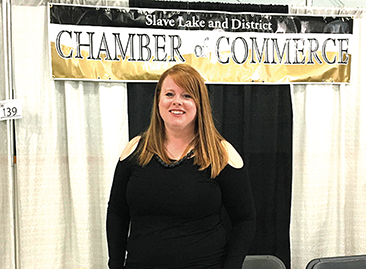 President Brittany Giesbrecht at the Chamber’s booth at the 2017 spring trade show inside the multi-rec centre in Slave Lake.