Shooting at an exploding target, it turns out, is one more thing that is not allowed in Alberta’s Forest Protection Area when the fire hazard is high.

Whoever was doing exactly that on the afternoon of May 6 near Slave Lake probably was unaware of the prohibition, but of course ignorance of the law is not an excuse.

According to Wildfire Information Officer Leah Lovequist, the person “on site” (the shooter of the targets) reported the fire at 1:54 p.m. that day. Lovequist says the person who caused the fire was able to contain the wildfire which was burning in dead dry grass. Wildland and municipal firefighters arrived and were able to extinguish the fire by 2:21 p.m.

The person who was using exploding targets was not charged.

Lovequist says the man was very cooperative and was able to stop the fire which was caused by his exploding target.

Lovequist says the Alberta Agriculture and Forestry Wildfire Investigator reported the use of fireworks or exploding targets is restricted in the Forest Protection area due to high hazard potential of starting a wildfire. In some instances, permission may be granted by a forest officer.

This restriction is one of the 2015 amendments to the Forest and Prairie Protection Act. Lovequist says others include discharging a firearm using tracer ammunition, and igniting fireworks in the Forest protection Area without permission from a forest officer.This can result in a fine of $287 and a person could also be charged with the cost of fighting the wildfire.

For more information on the amendments to the Forest Prairie and Protection act, visit www.fppa.alberta.ca

On average, every year 60 per cent of wildfires are human-caused.
“Wildfires caused by human activity are 100 per cent preventable,” says Lovequist in her regular wildfire report. The fire danger for the Slave Lake Forest Area was ‘very high’ at last report.

Citizens are urged to report wildfires immediately by calling 310-FIRE (3473). 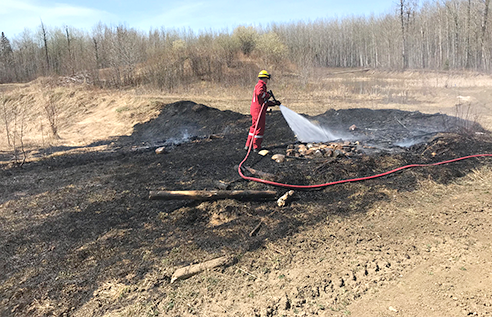 A firefighter sprays down the site of a May 6 grass fire, caused when somebody shot at exploding targets by the cemetery road, south of Slave Lake.