Are ‘fat’ bikes becoming popular? One passed your Lakeside Leader sports reporter on the way to work in a snowstorm the other morning. ‘Ding’, went a bell, and a few seconds later a woman pedaled past on a bicycle with very big tires, going through two or three inches of fresh snow with what looked like not much effort at all. She even went up the hill to the railway bridge without having to stand up, which suggests either that she’s Supergirl or that bike is very easy to pedal!
So we called up Slave Lake’s own bicycle expert, Rowan Robertson of Slave Lake Bicycle Works, to get the lowdown on these new machines.
They are becoming more popular, he confirms. He knows of nine fat bike riders in town and suspects there are more. The great thing about them, Robertson says, is they can glide over soft stuff (mud or snow) without getting bogged down like a regular bike would. They are geared similarly to regular mountain bikes.
The fat bikes not only extend the biking season, they allow riders to “go further into the bush,” without bogging down. Of course how much they bog down (or not) depends somewhat on how heavy the rider is.
In related news, the local cycling club is hoping to organize a first-ever winter bike race. Pending permission from the authorities, it’ll go in February of next year. 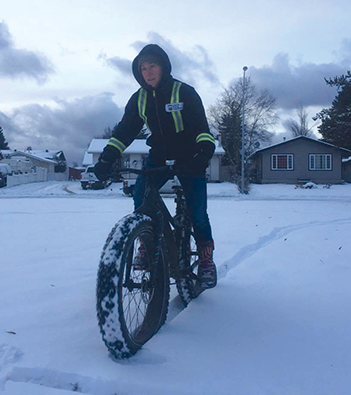