Chris Clegg
For the Lakeside Leader

The best option to deal with the contaminated Faust Osmose site is to put some dirt over it and leave it alone, says a report issued by Amec Foster Wheeler.
The company shared the findings of its report with about 75 people at a public meeting in Faust July 11.
Despite reassurances that the heaviest contamination is limited to the actual fenced site, the report did not satisfy many attending. At the end of the meeting, resident Wally Garrick asked the presenters to take off their bureaucratic hats and put on the hats of mothers and fathers.
“Would you move there?” he asked.
Faust was the site of a wood treating and preserving site from 1961-69 before a fire closed the site. Several products known to be cancer-causing were used to treat the wood.
Senior hydro-geologist Leslie Handy presented the report. He said 299 samples were taken throughout the area with virtually all of them indicating safe levels of contaminants such as dioxins, arsenic, chromium, copper, chlorophenols and hydrocarbons. Handy reminded people that some of the contaminants occur naturally.
The few samples outside the fenced area that indicated high levels of contamination were probably due to equipment carrying dirt and dropping it at a specific location.
Handy said the 1969 fire was the main cause of dispersal of contaminants.
“To move dioxins you have to move soil,” he said, adding that dioxins have to attach themselves to a solid compound, not water or air.
Samples indicated that the closer to the actual site, the higher the contamination. Handy said 205 samples were under four pg/g – a safe level – while 78 were above 72, 41 over 250 and 27 over 1,000.
Levels under four picograms per gram [pg/g] are considered safe in Canada, but 50 in the United States. A pictogram is one trillionth of a gram.
As a result, Handy’s company recommended a site management plan which included:
* soil-cap the highest concentrations of dioxins at the site;
*elevate walkways to direct foot traffic away from the site;
* remove the existing fence;
* continue monitoring the site;
* restrict covenants; and
*continue with stakeholder engagement.
“Further excavation is not recommended,” said Handy. “It exposes more and [increases] the risk of spreading.
“Keeping it capped will allow the dioxins to biodegrade naturally by limiting oxygen to it,” he added.
Questions from the public centred around the hot spots outside the fenced area and previous washing away of soil into Lesser Slave Lake.
“Why hasn’t that been fenced?” ask Jule Asterisk, referring to the hot spots.
The reply was that other samples around the hot spots were low and considered safe.
Asterisk added that the fence was put up to stop the spread of contamination, but one spot was accessible to vehicle traffic.
Bonne Raho questioned the samples taken.
“The whole area needs to be proven to us there’s nothing there,” she said, adding the government started with a small fence, then a larger fence, now no fence.
Mike Wolff was concerned that not all areas were tested, so there was no way anyone could know the extent of contamination near the lake.
However, Handy replied the general rule was, the farther away from the original site, the lower the readings.
Concerns of soil washing into the lake were also disputed in the report, despite local concerns. One resident said the site floods about every two years “which washes into the lake.”
Handy disputed the claim, saying the problem is the shallow soil.
He added time is also an ally in that the contaminants are biodegrading naturally.
“We’re 50 years down the road from how bad it was,” said Handy. “It’s still contaminated but a lot of it has disappeared.” 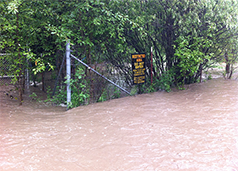