Something you don’t see every day is a highway crash scene where half the firefighters are filming the other half doing the work. Or a house fire – such as the one on 8th St. NE in Slave Lake last week – where some worked the fire while others filmed them doing it.
The story is that the filming fellows aren’t really firefighters – they’re just decked out that way after a couple of weeks of training. They work for Hillside Media Productions of Toronto and are filming the members of the Hall #1 of the Lesser Slave Lake Regional Fire Service in action for a ‘reality’ series coming out on “a major cable network.”
The channel is unspecified at this point, because it wants to do the announcement itself. The show may or may not be called ‘Hellfire Heroes.’
“That’s a working title,” says producer Sharone Ostrovsky.
Ostrovsky has an upstairs office at the new fire hall (rented from the Town of Slave Lake). Across the hall in one of the meeting rooms, eight or nine Hillside crew members are working on cameras, doing paperwork and otherwise keeping themselves busy, waiting for the next call.
When it comes, whichever crew of three of them is on call will sprint downstairs, throw on their bunker gear and climb aboard. Wherever it is, whatever the call, it’ll be filmed.
So far, so good, says Ostrovsky, explaining that in ‘embedded’ filming situations like this, it’s important for to be as natural as possible.
“We’re in the thick of it,” she says. “That’s the goal. We’re capturing what actually happens. We’re not directing.”
The bulk of the crew – sound and camera people – are from Alberta, many from small towns. That helps too.
The idea for a series featuring a fire department grew out of a brainstorming session a couple of years ago, Ostrovsky says. With wildfires in the news every year out west, it seemed an area ripe for investigation. So they started ‘cold-calling’ fire departments. Slave Lake’s was one of them.
“Within a few minutes I knew it was different,” she says. “They had a story.”
Things developed from there. Last spring the crew came out and shot a pilot. It obviously impressed somebody, because they got the green light and now they’re back at it. And loving it.
“We’re having so much fun!” says Ostrovsky.
Things could get more interesting, with wildfire season approaching. With four of the regular firefighters trained and available for work with the Forestry HACK crews, the possibility is there that the Hillside film people could take part in some of that as well.
“We’re so interested in the wildfire stuff,” Ostrovsky says.
In the meantime, it doesn’t hurt the local economy at all to have a dozen or so extra people in town, renting rooms, dining out and even engaging the services of a local caterer.
“Oh my God!” Ostrovsky exclaims. “It’s been one of the best experiences!”
And who is this catering genius? None other than former fire chief Greg Gramiak, who apparently makes a killer vegetarian lasagna. 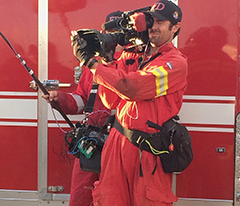 Tyler Robinson of Hillside Media Productions, decked out as a firefighter and filming at the fire hall. 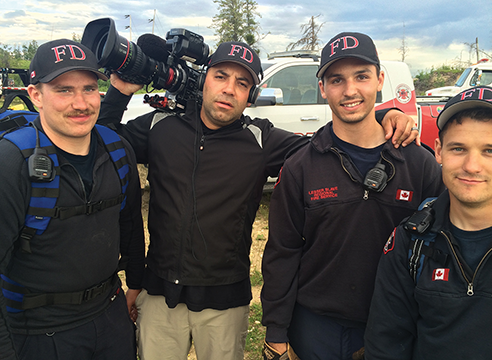 Take away the camera and you’d never be able to tell which one of these three guys is with a Toronto film production company. He’s Peter Esteves of Hillside Media Productions. Otherwise, left to right are local firefighters Ryan Coutts, Thomas Lougheed and Patrick McConnell.