Last week the Lesser Slave Regional Fire Service and the RCMP honoured several people who went well beyond what’s normally expected to help the firefighters, the police or a fellow citizen.
In one case, a whole office staff responded to an emergency; in another, friends and neighbours likely saved a life; in another, a passerby helped a police officer subdue a drunk, unruly and dangerous customer.
Started by the fire department five years ago, the program is called ‘Hometown Heroes,’ and it turns out it’s attracting attention beyond the region. A representative of the Canadian Volunteer Fire Services Association (CVFSA) was at the Dec. 11 recognition at the fire hall in Slave Lake and put Hometown Heroes in perspective for those present.
“The (CVFSA) is going to take your program and share it across Canada,” said Troy Mutch, the vice president of the organization. “We look forward to taking this coast to coast.”
In his opening remarks, fire chief Jamie Coutts talked about the idea for Hometown Heroes arose out of recognition that occasionally regular folks make outstanding contributions to the health and safety of their fellow citizens; often that also helps the people in uniforms do their jobs successfully. And as RCMP Sgt. Marlene Brown said in her remarks, “We sign up for this, but they don’t.”
The first hometown hero recognized, Coutts reminded his audience, was Rodney Fortin. He had come across a vehicle that had gone off the highway and ended up mostly submerged in a creek. He jumped in, cut the driver free of her restraint and pulled her to safety, likely saving her life.
Since then there have been one or two or three people recognized each year through Hometown Heroes. Usually the fire service and the RCMP team up to make the presentations. It was the same this year, with five recipients – one of them being a whole group.
Dropping everything to help
The first award went to the staff of Slave Lake Dental, along with passerby Steve Slack. As explained by deputy fire chief Alex Pavcek, driver of a vehicle had “a medical incident,” and crashed into a parked car near the clinic. Staff members dropped what they were doing, went out and “made the scene safe,” he said. Slack, a former volunteer firefighter had been driving by and stopped to help in that effort, directing traffic around the scene until the authorities arrived.
Drunk and dangerous
The second recipient of the Hometown Heroes award was Matthew Knutt. He helped out an RCMP who was having a very hard time with an unruly drunk driver. Telling the story, Const. Isaac Pickle said he’d stopped a suspected drunk driver in Slave Lake one night back in June. The driver refused the breath test, then “floored it and dragged me a bit.” The vehicle then stopped, and Pickle attempted to force the driver out of the vehicle, but he was not coming. In the middle of this wrestling match, Pickle said he heard from behind him an offer of help. It was Knutt, who saw what was going on and then in fact helped drag the uncooperative drunk out and subdue him, so the officer could get him in cuffs. It turned out there was a gun in the vehicle within easy reach, Pickle said.
Disaster averted on the farm
Timely intervention by friends and neighbours in Flatbush likely saved a life in the third Hometown Heroes award. Shawn Kearney, the fire department’s rural training officer told the story. He said a farmer in the Flatbush area had his arm pinched and trapped by the box of his grain truck. His friend Dwight Herdman missed him for coffee at the Flatbush store the next morning. When he didn’t show up for two mornings running, Herdman thought he’d better check, so he phoned Ken Sauter and asked him to go next door and see if Roger was okay. He wasn’t; he’d been trapped for 48 hours, unable to extricate himself.
Kearney said Sauter did exactly the right thing by not trying to free the man’s arm himself; he called 911, leaving the extrication to the professionals, who managed to save the arm along with the man.
“If they had done anything different, the result could have been drastically different,” Kearney said. 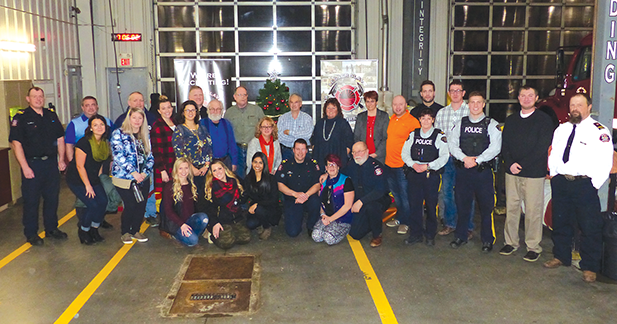