Fire trucks sped their way out of town last Tuesday responding to a call of a fire in Canyon Creek.

Deputy Fire Chief Alex Pavcek said they received the call around 11:00 a.m. that a house was on fire.

He said crews responded from Slave Lake and Widewater Fire Hall with 20 firefighters ready to battle the flames.

When fire crews arrived on scene the house was already up in flames making the fire an exterior attack said Pavcek.

“The fire was stubborn and took fighters four hours to put out,” said Pavcek, adding when they were finished nothing was left of the house.
He said fighters finished combating the fire around 4:00 p.m.

At this time Pavcek said firefighters were unsure of the cause of the fire and do not think it was an intentional act of arson.

Pavcek said since January they have responded to 63 calls with Tuesday’s house fire being the biggest one yet. 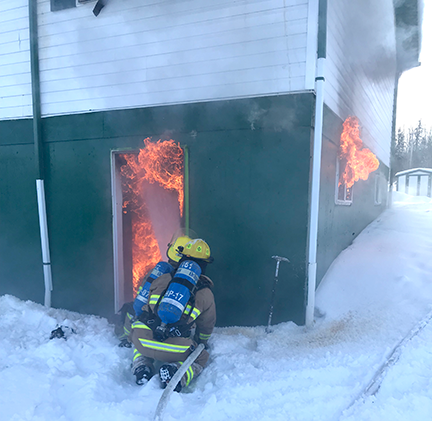