Those logs in the ditch are a safety hazard, says Slave Lake resident Dennis Barton. He’s speaking of the debris scattered in the ditch along Hwy. 2 east of Mooney Creek. It’s been there (or had been there when this was written) for over a month following flooding in June. Barton says one morning he was driving by in a heavy fog and realized the risk was even greater for somebody driving an ATV in the highway right of way, because they wouldn’t see the obstacle in time.

“They could get killed!” he says.

The story on the clean-up is more or less the same one The Leader heard from the provincial parks people on the extended closure of the North Shore Day Use area due to tree blowdown: it’s taking quite some time to round up the contractors and get them started. The highway work is being coordinated out of Westlock, we’re told, and is taking longer than was expected. 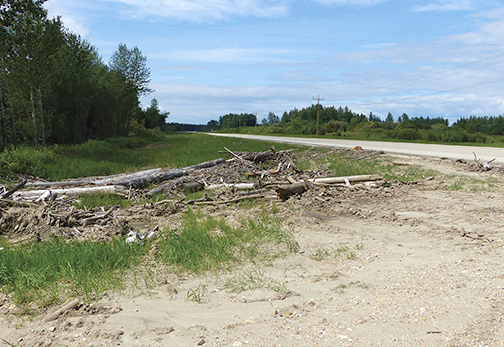 Flood debris in the Hwy. 2 ditch near Mooney Creek.