But donations still more than welcome

The Slave Lake Food Bank is well stocked after the 2017 Christmas season.
Lucille Cook, the interim executive director of the Slave Lake Native Friendship Centre, says the food bank stockpile of food has remained high due to the community’s generosity. Many brought either the $5 or $10 food bundles sold at Sobeys. The bundles come in a bag.
“We got an abundance of bags,” she says. “The community was very, very generous.”
Cook feels the stock should carry the food bank for a while. She adds that this is a tough time for people as school fees and bus fees are due as well as costs stemming from the holidays. She expects to see increased usage this month.
“We have lots to be able to supply,” she said.
The food bank does not have any real shortage of items but Cook says they can always uses items that typically have a long shelf-life. These items are for example any kind of canned soup or any kind of pasta.
“Anything that has a good shelf life would definitely be appreciated,” she says.
Cook says the food bank could also use eggs.
The hours of operation are changing. From now on it will be open from 10:00 a.m. to 1:00 p.m. on Tuesdays, Wednesdays and Thursdays. The hours used to be 10:00 a.m. to noon. Cook explains the changes were made to keep up with demand and be accommodating. Some people are only free to drop into the food bank to get food during the lunch hour.
As for the Santa’s Anonymous Christmas hampers, the numbers are up from last year. Cook says the hampers were delivered on Dec. 18, 19 and 20, 2017 and in total 205 were handed out. Last year 172 were handed out.
The items set aside for the hamper program have been mostly used up. Cook says there were maybe a couple of turkeys left over.
“That’s it,” she said.
Cook explains that there were more hampers than originally anticipated which meant more items needed to be purchased to fill them all.
If you want to make a donation to the food bank, all you have to do is drop off your donation to the Native Friendship Centre. 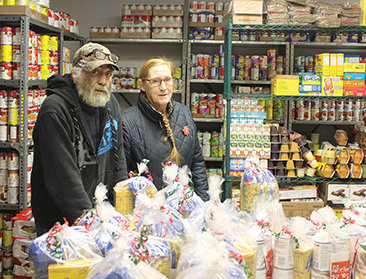