The Fort McMurray West 500 kv Transmission Project will have many benefits on the region both during construction and once operational.
Alberta PowerLine vice-president Quyen Nguyen presented this initiative during the Feb. 15, 2018 Slave Lake Business Support Network meeting at Northern Lakes College. Alberta PowerLine is a partnership between ATCO and Quanta Services.

This has been the fourth largest project Nguyen has run for ATCO. The project started in 2010 with the government of Alberta and the Alberta Electric System Operator (AESO). The idea is to allow power to flow in and out of Fort McMurray. It also covers power generation in the area.

This venture includes a 500 km long power line that starts at the Thickwood substation out of Fort McMurray and ends in the Wabamun area. It passes to the east of Slave Lake. There will be two new facilities included in the construction and it is estimated that there will be 35 years worth of operation and maintenance.

Nguyen explained that the construction of this power line has been carefully planned. Environmental risks were taking into account. There was a comprehensive assessment done which included looking at the affected water bodies, animal habitat, land impacts and First Nations.

“Our goal is to create balance,” Nguyen said.

The line will be going through farm land as well as muskeg. The land in question is both crown land as well as private land in some areas. To help mitigate the risks to the land, rig mats were purchased. This protects farm land from the heavy equipment.

Construction began last August and Nguyen said work is best done in the winter. The land is better able to withstand the heavy equipment during the colder temperatures. He said it has been a productive winter. Conditions have been favourable since after Christmas.

Nguyen was pleased to announce that this project was moving along on schedule for the spring 2019 completion. The first tower was competed and power lines were strung on it as of Jan. 7, 2018. Not all of the towers are completed though. Many are on private land south of the Athabasca River but brush removal is ahead of schedule.

For this year, the plan is to work until mid-April when the land thaws out and access becomes an issue.

In Wabasca, workers took up all the rooms at a lodge. Alberta PowerLines hired local contractors to clear the land as well as do land reclamation.

Slave Lake itself has a main ATCO operation centre. This will make Slave Lake a major hub on this line. Long-term benefits include the contracting of local contractors to do maintenance, the used of hotels, retail stores, fuel stations and restaurants by workers.

“It benefits a lot of people in different ways,” he said.
The next BSN meeting will take place on March 15. 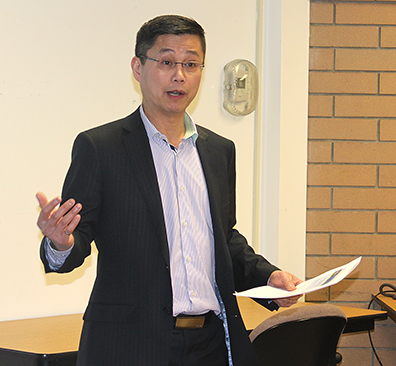 Alberta Powerline vice-president Quyen Nguyen presents the The Fort McMurray West 500 kv Transmission Project and the many benefits this infrastructure will have on the area. This discussion took place at the Feb. 15, 2018 Slave Lake Business Support Network meeting at Northern Lakes College.