The athletes from the area who joined Team Alberta North at the recent Arctic Winter Games in Hay River and Fort Smith did quite well. We mentioned last week the silver and bronze medals won in hockey by Jacob and Kennedy Hartman. Here are some more;
Starr Twin was a gold medalist, winning the Dene Games Finger Pull over some stiff competition. She followed that up by winning bronze in the Stick Pull event. She won silver in the pole push, a team event. She also competed in the Snow Snake competition, coming in seventh. Twin’s results were good enough for a silver ulu for overall performance, making her the most successful of the local athletes.

The gold rush continued with wrestler Courtney Reason, who won a team gold along with her Alberta North teammates. In individual competition she won silver and bronze – one in regular wrestling (silver) and one in Inuit wrestling (bronze).

Snowshoer Julie Vance finished in fourth place in a Day 1 event, the 2.4-km. Cross Country Juvenile race. That was a good result but she did even better in the 5-km. Cross Country race four days later, winning the bronze medal. In the Short Distance Combined (three separate races), Vance finished eighth. In the 4 x 400 relay, she was part of a bronze medal-winning team.

Carlee Dick of Assineau also competed in snowshoeing, in the Junior age group. Her results improved each time she ran, starting with a seventh, improving to a fifth and concluding with a fourth-place finish in the Short Distance Combined. In the 4 x 400 relay, she won a bronze medal.

Zoe Ey, also of Assineau, was in the Dene Games competition. She finished seventh in the Stick Pull and 10th in Snow Snake. Competing in the pole push as a member of a team, she won a silver medal.

Cruz McGregor’s best finish in the Arctic Sports was in the Arm Pull, where he ended up in fourth place. He also competed in three high-kick competitions, the kneel jump, the sledge jump and the triple jump.

Montana Ross was another snowshoer who made a good account of himself. His finishes ranged from seventh to fourth in three individual events and a bronze in the 4 x 400 relay. The fourth came in the Junior Male Short Distance Combined, made up of distances of 100, 400 and 1,500 metres.

Karl Koester of Widewater did well in Inuit Wrestling, picking up a bronze medal. In the team competition he won a gold medal.

Alberta North edged out Alaska for top spot in the total medal count – 133 to 125. Alaska had one more gold medal.

Tim Horsman, who took part in the Games as an Arctic Sports coach, says organizers did a great job, and in Fort Smith, at least, “they treated us like royalty.” Speaking of the overall Team Alberta performance, Horsman says he believes it’s the first time TAN has ever topped the medal standings. 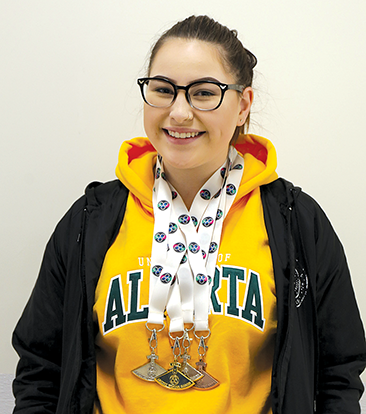 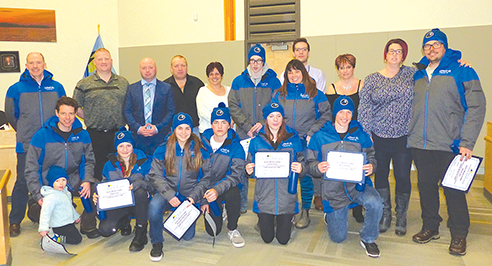 Arctic Winter Games athletes, coaches and mission staff members, with town council just before they left for the Games.