Home Uncategorized Good time had by all at the annual M.D. Ag Service Board fall social

Around 150 people turned up for the 2017 edition of the M.D. of Lesser Slave River Ag Service Board’s Fall Social. This year it was at the community hall in Smith, on Nov. 4.
“I think it went really well,” says Ag Fieldman Dawnia McCann, who acted as emcee for the event.
It certainly turned out better than some were predicting a week earlier, when ticket sales were nowhere near where organizers hoped they would be. But it worked out in the end.
The theme this year was ‘Keep Your Roots Local,’ which was in keeping with the Canada 150 trend going on generally across the country this year. This was a bit of a departure from the norm, which is to pick a country and tailor the entertainment and food offerings accordingly. This year, McCann says, the idea was to make things as Canadian as possible, and more specifically, ‘local.’
“We tried to source our ingredients as local as we could,” she says.
The roast beef wasn’t quite from within the M.D., but you probably couldn’t tell by the taste. The beef jerky appetizers were, though, from Klassen’s of Flatbush. Honey in the roast pork glaze came from Hastie’s of Smith and tea and certain herbs used in the cooking came from Flatbush’s own Chickadee Farm.
The entertainment was about as local as it gets as well.
“We had three entertainers,” says McCann. “Four students from Smith School did a couple of songs, and the Smith Old Time Fiddle Band. And Nicholas McCann from Fawcett – he plays piano and guitar.”
One of the attendees was newly-elected M.D. councillor Becky Peiffer.
“It was great,” she says. “A good time. The food was amazing. Sheila Willis did a really good job.”
Willis’s presentation was on local history and of course she also let the audience know about her ‘History Check’ mobile app that was recently launched.
Another highlight of the evening was recognition of Murray and Debbie Kerik being named ‘BMO Farm Family of the Year,’ which is a program done through Northlands. They were officially presented with the award at a ceremony in Edmonton on Nov. 10. 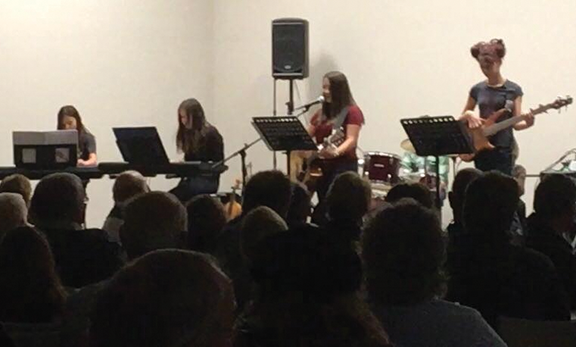 A band of students from Smith School entertains attendees at the Fall Social in Smith on Nov. 4.
Photo courtesy Jennifer McLeod