Home Events ‘Great Trail’ celebration on the river on August 26

A ‘floating parade’ event is being planned to celebrate Canada’s ‘Great Trail’ (the new name for the Trans Canada Trail) on Aug. 26. The town, M.D. and local trail development group are teaming up to put it on.
The idea is to get dressed up, come down to the river and float or paddle for a certain distance on canoes, kayaks, paddle boards or tubes. Prizes will be handed out for the best costumes. A free barbecue lunch is part of the picture.
What does the river have to do with the Great Trail? Lots! To connect the existing parts of the trail in time for Canada’s sesquicentennial, the Great Trail Committee worked with municipalities to designate certain rivers and lakes as ‘blueway’ sections of the trail. Locally, the Lesser Slave River between Smith and Slave Lake has been so designated. The ‘Peace River Trail,’ comes from Sawty to Moose Portage; the trail continues from there as part of the M.D. road system to Smith and then it’s a water section to Old Town Slave Lake. From there it switches back to a woodland trail running north through the provincial park, parallel with Lesser Slave Lake.
At Marten Beach, another bush-trail section begins, heading west across the north shore of Lesser Slave Lake. It’s an officially designated ‘greenway’ section of the trail, on which improvements are planned over the next few years. All of this is part of the Trans Canada Trail.
Look for promotional stuff on the event in the coming weeks. We’ll also provide further details in The Leader. 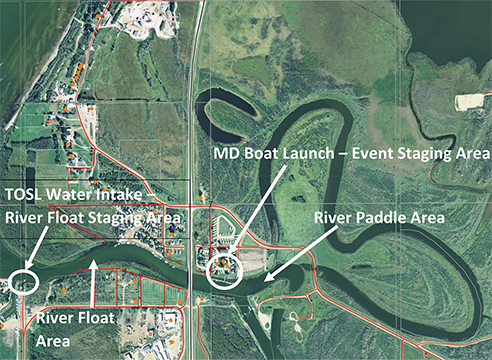 Proposed area of activity for the River Parade on Aug. 26, being put on to celebrate the completion of The Great Trail.