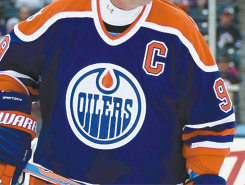 Slave Lake’s Ice Breaker hockey game and banquet keeps going from strength to strength, but it’s going to be hard for organizer Shawn Gramlich to top his most recent accomplishment. Gramlich confirmed the rumours last week, announcing the following on social media:
“I am so excited to announce this! Save the date because it doesn’t get any bigger or better then this! Mr. Wayne Douglas Gretzky, ‘The Great One,’ will be joining us August 26th in Slave Lake for the Ice Breaker Hockey Game!
The other side of the story is it costs a fair amount, and Gramlich’s group has a lot of fundraising to do between now and then. Because The Great One doesn’t come cheap.
On the other hand, early indications are positive. Within hours of making the announcement, Gramlich said he was getting calls from all over the province and even outside of it. If Gretzky is there, apparently, people will come. Sort of like a Garth Brooks concert, without the drive to the city.
“It’s going to be a lot of work,” Gramlich says. “But it’s going to be covered.”
Gramlich had been working on it for about seven months – talking to people who talked to other people.
“They were kind of vetting me,” he says. “A lot of questions from a lot of agents.”
Gramlich says the idea was kind of a pipe dream, as Gretzky only does a couple of such appearances a year, outside of the big league stuff he’s involved in. Having Marty McSorley and Brent Gretzky on side probably helped; both have been to Ice Breaker events in Slave Lake and would have recommended it.
Then one day recently Gramlich got a call from somebody claiming to speak for Gretzky.
“I thought it was a fake.” he says.
But it was the real deal: Gretzky was willing to come, if the organizers were willing to come up with X amount of cash. It was a bit scary, Gramlich says, but he decided to take the plunge. He made the online announcement, and his phone started ringing off the hook.