Len Ramsey
For the Lakeside Leader

Sports are difficult to avoid in Slave Lake and a couple of guys who grew up here have made hockey a big part of their lives. Shawn Gramlich has pursued it passionately in his spare time. Kyle Muzyka would like to make it a focus of a career in journalism. Growing up in Slave Lake influenced their world view and the passion with which they’ve pursued their dreams.
Shawn Gramlich was raised in Slave Lake and is glad he stayed. He says that working in the oil patch has turned out well for him where he specializes in well optimization and inspection. All he cared about in school was playing hockey.
Shawn continued that passion after finishing high school by playing four years for the Slave Lake Wolves Junior hockey team. He’d loved playing and he wanted others to experience the same. Unfortunately, the team was running out of funds and its continued existence wasn’t assured. So, he came up with the idea to invite a bunch of retired NHL players to town for a challenge game against a group of Slave Laker hockey enthusiasts.
That became the annual “Ice Breaker” event that culminated last summer with an invitation of Wayne Gretzky to speak and Gord Bamford to play at a banquet.
“I’m not going to try anything that big again,” he says. “When ticket sales weren’t going well, I was afraid I was going to have to mortgage the house.”
But true to the nature of the town, a lot of people bought their tickets at the last minute and the banquet was sold out.
After the unfortunate death of his wife’s nephew a number of years ago, Shawn used the proceeds from the “Ice Breaker” to fund projects such as the off-leash dog park area by Roland Michener School.
Shawn adopts a philosophical approach to school. He says if you’re a good student, you’re a good student. For him, Roland Michener provided all he wanted in the way of programming. He says that his shop, art and home-ec classes were all excellent.
He says that attending a relatively small high school also gave him a different kind of education. He made connections with people with all kinds of interests who have pursued different kinds of careers. He says that even though they’re not all going to be close to you, you can still talk to them. He says that’s the reason he gets remarks from guys like Marty McSorley, who says that Slave Lake’s the kind of town where a deal can still be made with a handshake.
For Kyle Muzyka, the big advantage of growing up in Slave Lake was its proximity to nature. His parents’ home in Mitsue gave him the opportunity to walk into the wilderness whenever he wanted. Kyle now lives in Edmonton where he enjoys walks in the river valley, but he says, “It isn’t the wilderness.”
Kyle dreamed of career as a journalist with a focus on sports. After high school, he moved to Edmonton to study journalism at Grant MacEwan University. Like many other Slave Lakers, he did not find moving to the city for post-secondary easy. He says that many of the students in his program came from Edmonton, where they already had a group of friends they’d known since childhood, free room and board without the effort of everyday living.
Kyle says that the people he’s met from the city never leave. Most have never experienced the joys of camping and quadding and know little about life in the north. They’ve been able to take university courses in high school through the Advancement Placement program and so have greater opportunity to pursue option courses in university. Kyle says he also missed the opportunity to play high level sports that aren’t available in northern communities like Slave Lake.
Kyle does say that his connections with the north have helped him in his career. He began his career by the CBC that describes him as a “Métis journalist and pinch-hitter for CBC Edmonton.” Like many organizations, CBC doesn’t always update its personnel pages.
Kyle presently works as the digital producer for CBC Edmonton’s afternoon show, “Radio Active,” where he writes stories for the website and social media and does occasional spots on radio and television. Even though he’s achieved lots of success for someone in his early twenties, he’s still not entirely happy with his career. Probably won’t be until he can cover his first love, sports. 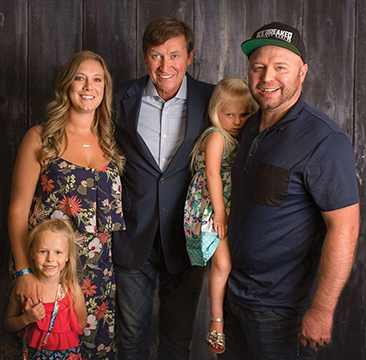 The Gramlich famiy with Wayne Gretzky, at the Ice Breaker event in August.