One comment you hear a lot these days goes something like: ‘The forest industry is keeping the local economy from collapsing altogether.’
That may be over-simplifying the matter – for one thing because the softwood lumber industry is facing some stiff challenges. But in the case of Alberta Plywood, it turns out things really are humming along very nicely.
“We’re at historical highs,” says new mill manager Shea Pletzer. “Plywood markets are doing very well.”
Those would be Canadian plywood markets, which consume virtually all the product produced by the mill. That product, for those unfamiliar, is the veneer that is made into plywood at another plant in Edmonton. Producing it keeps about 140 people employed at the Mitsue Industrial Park facility. A further 48 are salaried types in the administration and woodlands sides of the operation. The woodlands people, it should be noted, are involved in planning and such for not just the wood supply for one mill, but for three in the area. The other two are Slave Lake Pulp and High Prairie Forest Products – a lumber mill. Overseeing the department is woodlands manager Bert Larocque. He estimates the number of jobs sustained by woodlands operations (logging and hauling) for the three mills is around 400.
“We haul about 47,000 loads a year,” he says.
The company also will have planted 10.5 million trees this year by the time the season is finished, Larocque says.
Getting back to Pletzer, he’s been mill manager since last December, having been promoted and transferred from West Fraser’s lumber treating plant in Sundre. He was a superintendent there for three years, following three years at a West Fraser lumber mill in 70 Mile House B.C. And before that?
“I’m a forester,” he says. “I’ve always worked in the wood products industry.”
Originally from Vancouver Island, Pletzer got his forestry degree from the University of British Columbia. He says he worked in various roles for different companies, before, “I was lucky enough to get on with West Fraser.”
Slave Lake has made a good impression on him so far, Pletzer says. He’s enjoyed getting to know people in the community, as well as the Alberta Plywood community.
“Great people,” he says.
Outside of work, Pletzer is enjoying a bit of slowpitch softball, hopes to get in some boating and looks forward to cross-country skiing this winter.
Anything else?
“We’re always hiring!” he says.
Larocque adds to that, saying the woodlands department is looking for a couple more logging contractors. 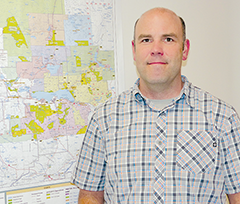 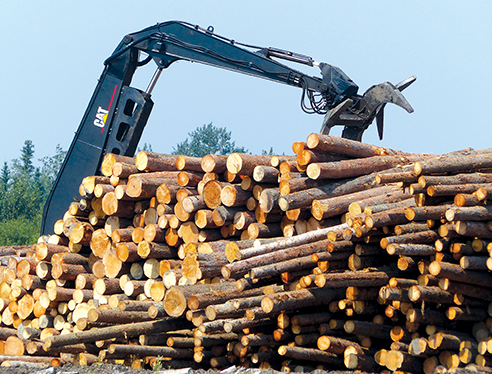 Logs being moved around last week in the Alberta Plywood yard.