Home News Horse programs based in Smith growing in popularity

Things are happening in the world of horses around here and some of the people involved think it deserves more exposure. So after being urged to look into it, The Leader called around last week to find out what is what these days when it comes to equine programs and activities in and around Smith.
“It’s going really well,” says Danielle Geddes, one of the people at the centre of equine culture in Smith. Together with Christine Carter, she looks after SHARA’s horse programs, which include equine clinics (three so far this season) and various activities the year round, in and out of the Smith arena.
Carrying on at the same time is the Smith Traildusters Club, which holds gymkhana events every other Sunday from May through September at the Trailduster Grounds in Smith. Participation is up generally, Geddes says.
JD Dennis is one of a growing number of Slave Lakers who take their kids to Smith to participate in the programs. He sees it as a great opportunity for families and would like more people to know about it.
“It’s only a half-hour drive,” he says.
The gymkhanas feature five timed events, in several categories – from kids on horses led by their parents, to ‘unassisted.’ And for all ages, Geddes says.
On top of all that, Geddes has a business going, in which horses play a somewhat surprising – or at least non-traditional – role. It’s called ‘equine-assisted learning (EAL),’ wherein groups of people involve horses in the tasks they are assigned (but not while riding).
“The horses are part of the team,” Geddes says. “(They) show me through their body language if something is wrong.”
“It’s for anybody,” Geddes continues. “Not just for people with special needs. “I can do corporate workshops.”
If that’s not very well explained, consider reading up on EAL on websites such as equineconnection.ca, one of whose slogans is: ‘Horses are the teachers!’ Or for that matter, Geddes’s own website, hiddenharmony.ca.
So what’s the best way to find out about what’s coming up in the way of horse clinics and other activities? We’d like to say it’s as simple as opening the SHARA website, or the Traildusters’ website, but apparently it isn’t. An old-fashioned phone call will do the trick – or you could saddle up and ride down to the next gymkhana, which should be on Sunday, July 30. The Slave Lake Region website offers the following phone number for the Traildusters: 780-829-3628. 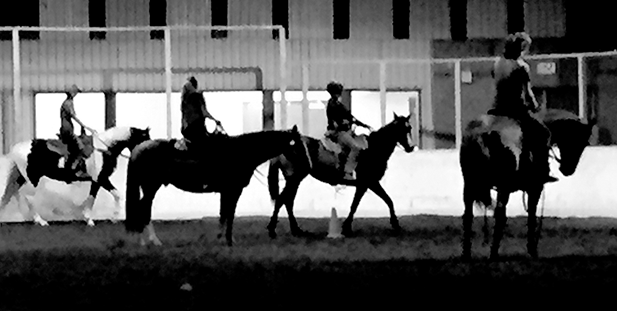 Silhoutted riders and horses at a clinic on horsemanship at the Smith arena.