Home News Jackpines win round one of pine beetle experiment

The mountain pine beetle experiment in the jackpines near the Hwy. 2 Athabasca River bridge got off to a rocky start last fall when a mini-hurricane knocked over a lot of trees in the area.

A few months later the loggers moved in and removed a lot of trees, both down and standing. So researchers didn’t quite know if there would be anything left when they got back to check on their site earlier this month. But good news – there were still a few of the test trees standing.

Antonia Musso, one of the University of Alberta team conducting the experiment, says what they found was not quite what they were hoping for, but still useful.

“Our original question was how many attacking mountain pine beetles are required for successful colonization in jack pine trees, so unfortunately we did not find our answer.”

What the experiment entailed was putting infected blocks of lodgepole pine from an area of heavy pine beetle infestation around a dozen healthy jackpines at the site southeast of Slave Lake. The base of the trees was enclosed with a wire mesh screen to make sure the blocks stayed put.

So what did they find? A low level of attack, successfully repulsed by the jackpines’ natural defenses.

“All trees were attacked at very low densities,” Musso says. “The highest number of attacks we counted on one tree was 19, which is about a third of what we hoped. All of the trees resisted attack by the beetle so no beetle offspring were produced.”

So although the experiment hasn’t shown at what level of attack jackpines lose the battle, it does show effective resistance to low-level attack. The studies continue.

“We will continue to try to figure out how many beetles it takes to successfully attack a jack pine tree with a new experiment this year,” Musso says. 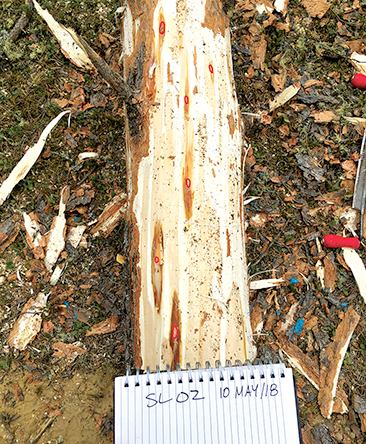 A jackpine tree from the experiment, showing points of pine beetle attack. The tree successfully killed off the invading insects. 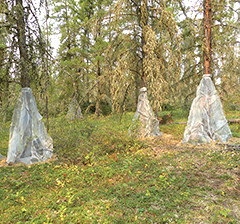 The experiment site in October 2017