Gilwood Golf Club manager Tom Tippin has a nice problem: so many kids showing up for the junior program he’s struggling to fit them all in. He’s got two age groups on Monday night and another on Thursday evening. He’s thinking of adding another session, maybe on the weekend.
And the reason for the explosion in interest? The Slave Lake Petroleum Association sponsoring the fees of the first 40 registrants probably has something to do with it. But another factor is program instructor Thomas Spencer.
“I wish I had three people like Thomas,” says Tippin. “He’s really good.”
Spencer is an assistant at the pro shop this year. He’s also a competitive golfer, who hopes to turn pro next year. And in case that doesn’t work out, “I want some experience as a teacher,” he says.
He’s getting plenty of that. Last Monday he had 10 or 15 in the nine-and-under group on the putting green for a lesson at 6:00 p.m. At 7:15 a group of 10 – 12-year-olds showed up for their lesson. And on Thursday it’s the 13-and-up group.
“We’ve got over 55 right now,” he says, “and more coming. The last few years I heard it was 20 to 30 and the numbers went down as it went along.”
So what’s different about what Spencer is doing?
“More kids are learning etiquette,” he says. “For example, the first week I talked about respect. In golf as in life.”
Every lesson covers a certain skill set. One week will be on the putting green; the next will be on the driving range. Then on the third week, the kids get to go out on the course to apply what they’ve learned.
Where Spencer learned a lot of this stuff was from his dad Ryan Spencer.
“He had me out here when I was four years old,” he says.
Born in Slave Lake, Spencer moved around a bit, golfed everywhere he lived and ended up going to high school in Grande Prairie, where there was some good competition in the game.
“I played in the Maple Leaf Junior Tour,” he says.
A highlight of his amateur golfing career so far was a win in a tournament at age 13, qualifying him for the nationals. Next week, Spencer competes in the Alberta amateur championship in Ponoka.
“It’s my last year as an amateur,” he says.
Spencer’s best round at Gilwood?
“Last week I shot a 71,” he says. 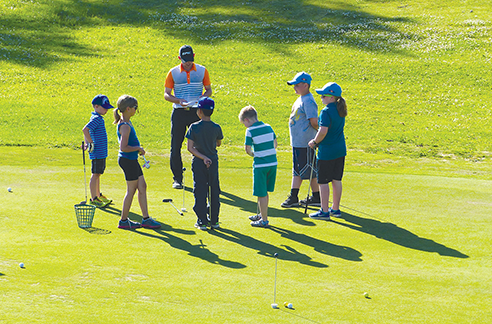